I am fussy about cherries. I very much like a sour cherry flavour, and I loathe bakewell tart. I can eat fresh cherries by the crate. This penultimate advent tea is one sneaky final green tea flavoured with Sencha Wild Cherry. A delicate pretty leaf, decorated with rose petals, and a strong aroma of cherry before water is even added to it, and I’ve made enough of it for Pete to have a cup as well, because it’s always good to have a second opinion. 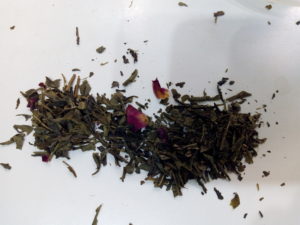 The tea is golden yellow and tastes just as the smell indicates that it is going to – which if you’ve ever made a fruit or herbal tea from a teabag you will know is quite a special thing. The flavour is delicate and fresh enough that while it does remind me of the bakewell tart, it’s still pleasant to drink. Perhaps not one I would rush back to, but certainly a brief moment of sakura in wintry Wokingham. 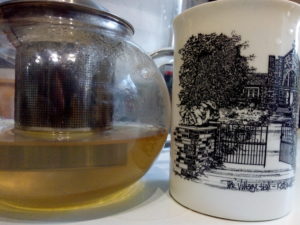 Your penultimate advent mug celebrates Kettlewell Village Hall. Kettlewell is a village in the Yorkshire Dales, to which I have no attachment and of which I have very little knowledge. Pete’s mum presented the mug to Pete as though there it told some important story, so it’s kind of sad that I don’t really know what that story is. Perhaps he should have written the post today. What I do like about Kettlewell Village Hall is that it looks like exactly the kind of place you would book to run an antenatal class, and its cupboards are probably full of these mugs, so that the local antenatal teacher doesn’t have to store a plastic box of them in her garage.