Today’s tea is a white tea, not as in tea with milk but as in a particular minimally processed tea drunk without milk. White tea suffers from health claims coming out of its silvery tips, including claims that it can fight cancer and defeat world hunger. Apparently this one is also used in the manufacture of face cream. It does not however taste like face cream, which on the whole is a good thing, as Pete will attest.

It is a pleasant drink even if you don’t believe the woo or indeed care much whether your morning revitaliser can also promote (or destroy, I can’t remember which) free radicals. I generally enjoy the company of free radicals, so perhaps this is the sort of tea I should drink more of. It would also save me buying milk, which would be good for the planet; so if I ever decide to cut back on another one of life’s pleasures for the sake of the children and the fishermen of Wokingham, this is the tea for me.

The leaf of Tea of Life Natural White Tea is pretty, presumably because nothing much has been done to it apart from a light steaming and being dried in the sun (a process I also enjoy myself). You make it by first adding a little cold water to the leaves, then hot; and it can steep a long time, with a floral hint just starting to develop after quite a few minutes. 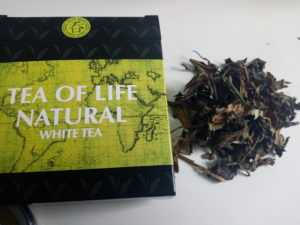 Today’s mug is a lined glass cup which Pete gave me after I admired the ones they use to serve fresh peppermint tea in Pizza Express. We used to have two, but one of them met with an accident. 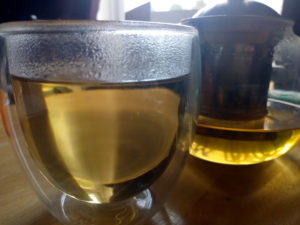