Finding time to do more than just thoughtlessly swill down my morning cuppa really casts a light on what I already knew, which is that December is a busy old time in my line of work. Today I am ably assisted by the glamorous Pete, who swished down the stairs mid-morning with the look of a man about to put the kettle on. I had already extracted my daily dose of tea from the advent calendar, so threw the box at him as he passed the dining table where I work, and a few minutes later there was a glorious steaming pot of Ceylon Ella Rock Black Tea sitting beside me, and nobody on the zoom call was any the wiser. He had even photographed the leaves: 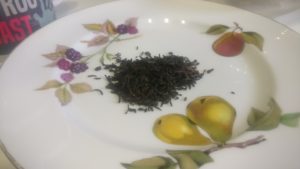 Ceylon is a pungent tea with a flavour I can only describe as tea-like. I once spent a week in Sri Lanka, which was very hot and full of interesting statues and monkeys, and I happily drank an awful lot of tea. I did some other things I am less sentimentally nostalgic about, like getting married to a really awful man, so let’s focus on the tea and monkeys. Later I divorced the man, and then there was Pete, and Pete’s mum provided this particular cup of tea, so it all turned out well in the end.

Today’s mug commemorates my now-ceased-but-much-admired-in-small-circles podcast. I’m sad not to make it anymore, but it was a lot of work and I would have found it really hard to make it right now. I’m very proud of the 60 episodes we did produce, and people do still listen to it from time to time. 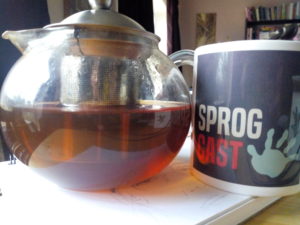