In a few days, it will be exactly a year until the lovely Maisy passed away. It is also almost exactly six months since Henry joined us. He’s been a problematic cat, and is soon to be moving on to a new home. The two cats have been very different in personality and comportment, and so with this interview-style blog post, I hope to capture their idiosyncracies.

Hello, and welcome to the show. 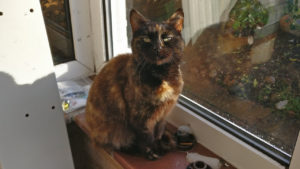 Maisy: Hi! I don’t think we’ve met before! I’m Maisy and it’s so super to meet you! I love your shirt. Tell me all about yourself! 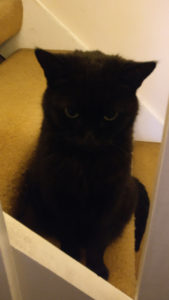 Henry: Oh for fuck’s sake. Another person. Please don’t tell me you’re going to expect me to make conversation?

So let’s get physical appearance out of the way. How would we recognise you in the street.

M: I’m quite small, I sometimes get mistaken for a kitten. My colouration is best described as “tortoiseshell”. The vet used to call me a “naughty tortie”, hee hee! He was nice, he had warm hands.

H: Well, leaving aside the fact that I wouldn’t go out into the street, so your question is stupid, I’m black from head to toe, which kinda matches my soul. I suppose I’m fairly big, and I’ve got this loose skin around my belly from back when I used to be chonkier.

And how would you greet me? What’s your standard salutation?

M: Over the years I’ve developed this little grunt I like, it’s a kind of airy “brrfff” that gets the point across nicely.

H: I tend to say “Muh-row!” where the first syllable is an F# and then the second is the F# one octave higher. Don’t ask me why, it’s just what I do.

M: Oooh, the back of the sofa is one of my favourites. I often fall asleep up there, and then when I nod off and start to slide off, I have to DIG IN to stop myself falling off entirely. The sofa gets a little scratched, but I can’t envisage a world in which I might sit somewhere less unstable.

H: Depends where’s warmest. There’s a nice spot in the kitchen by the radiator where the hot water pipes pass underneath, so that’s got double the heat sources. When the heating’s off, I’ll try to find someone who’s sitting down, and leech some heat off of them. In the summer, the conservatory is pretty nice.

Are there any places that you aren’t allowed to go on your own? Why’s that?

M: Yeah, I’m not allowed in the kitchen unattended. Probably because when I’m in there I can’t resist the urge to jump up onto the surfaces. Don’t know why people make such a fuss, my paws are clean, I lick them regularly.

H: The bedroom doors are always closed when there’s no-one in there. Now I can’t be completely sure, but there are a few occasions when I took a big fat dump on the bed, so that might be something to do with it.

On that note, how are your toilet habits?

M: Impeccable. I always go in the garden and bury it carefully so as to leave no trace.

H: In the summer, I go in the garden. Just drop it right there on the lawn, the staff clean it up for me. In winter, I try and use the litter tray when I can, but as long as I can get it in the general vicinity, I’m satisfied. But only if the litter tray meets my specifications, of course. If anything is amiss, then I’ll use the next best thing, like a curtain, or a bed, or something like that. You know, regular stuff.

Would you describe yourself as athletic?

M: Well, I’m not as sprightly as I used to be, but yeah I like to get fresh air and exercise, do some jumping and climbing, bit of zooming around. Got to stay in shape.

H: Absolutely, I kick a pom-pom around for a few minutes every day, that should be enough for anyone.

M: Love it. I had some difficulty settling in, because the other cats in the neighbourhood bullied me sometimes, but I think we reached an understanding.

H: Depends on the weather. I’ll go outside in the summer, if the weather’s nice, and someone leaves the door open for me, but in winter, you can forget it.

How are you with cat flaps?

M: I’m a legend. I can do stuff with cat flaps that you’ve only dreamed about.

H: Hate the fucking things. The only thing I hate worse than having to use a cat flap, is being outdoors. So, I’ll use them, but only under very limited circumstances.

What habits do you have that particularly annoy your housemates?

M: Hahaha, well this is kind of embarrassing, but I do have a thing I do where I jump in through the bedroom window at 6am, and then meow at the bedroom door to be let out, so that I can run downstairs. I think this annoys my housemates because they think I could just use the cat flap to achieve the same end result in a way that doesn’t require outside assistance, but they’re missing the point, aren’t they?

H: Nope. I mean, apart from the pissing and shitting everywhere. I reckon that irks them a tad.

How do you feel about scratching posts?

M: Oh they’re so silly. They’re a poor imitation for a nice piece of furniture. Give me some furniture to scratch on, every time.

H: They’re for scratching on, right? I don’t see why we’re even having this debate.

M: Nah, not one for toys. I like to sit on or in a box every now and then.

H: I’ve got these pom-poms, and well, I’ve gotta be square with you, they’re the one thing in this world that I really love. I carry them around in my mouth, I sing to them, we play a little chase game. They complete me, they really do.

Would you describe yourself as touchy-feely? Which parts of your body do you like being touched the most? Which do you hate?

M: Yep, very touchy-feely. But the one place I won’t tolerate being touched is on my fluffy tummy.

H: Hate being touched by strangers, except maybe under my chin. Love that. People I know better, I’ll let them touch me, but only above the waist.

How do you communicate displeasure if someone touches you inappropriately?

M: Totes! Let’s dance! I might even sit on your shoulder!

H: Not a huge fan, but I’m starting to come round to the prospect. Only for short bursts though.

M: Hahah, when I was very small, I’d run away even at the sight of a guitar! But I soon got over that. I’d say I have fairly diverse musical interests.

Thank you very much for your answers. It’s been a pleasure talking to you!