Another box from AFBeerClub, and more new beers (plus a couple that I’ve had before, of course)! 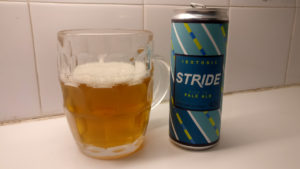 This looks good out of the can, a robust beerish colour and a fairly sweet smell with a little tang of antiseptic. However, I wasn’t particularly enamoured with the flavour. I found it to be a bit thin and watery with some of that old metallic fizziness. I didn’t detect much in the way of classic beery flavours, be that hops or malt or anything from that stable. It’s not hideously unpleasant, I just found it to be a bit boring. And crap. 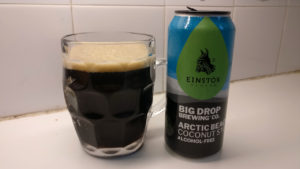 This is a coconut stout. Now, normally I would save something like this for last, but because this is from Big Drop, who so often disappoint me, those normal rules do not apply, so I decided to get this one out of the way early. It comes in a large can – at this point in my notes I scribbled down “to prolong the torture”, which gives you an idea of how low my expectations were. It looks, and smells, alright – it reminds me of their hazelnut porter, which is one that I definitely did like.

With the first sip – by god that tastes amazing. It’s perhaps a little thin, but the flavours are bold, and the coconut element is pitched exactly right – there’s enough there that it comes through, but not so much that it dominates and the drink stops tasting like a beer and starts tasting like coconut syrup. This is such an incredibly delicious stout that it makes me consider trying the regular Big Drop Stout again, in case they’ve changed their recipe to be anything like as good as this. 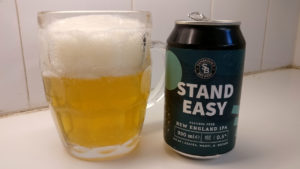 This is an IPA that pours with a very lively, thick and creamy head. The aroma is superb, a very inviting and smooth floral hoppiness. The flavour sadly doesn’t quite live up to the promise, it’s got some rough edges and is a little tart and sharp. That said, the beer is on the whole very easy to drink, and does more than enough to hold its own against the other beers that I’ve awarded…