As always, these are some of the beers in the monthly AFBeerClub box. 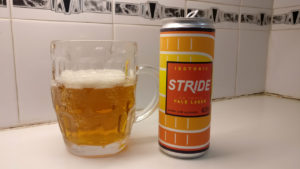 I wasn’t terribly taken with the Stride pale ale in the previous instalment, so didn’t have high expectations for this one. It has a nice deep colour and a small head, and the smell has a nice bold fruitiness. The flavour was fairly unpleasant to my taste though, I found it to be rough and very sour. Can not recommend. 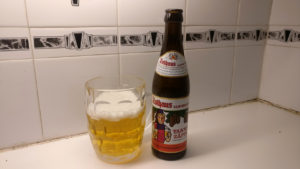 This has a good head, though the smell is a bit sour and acidic, to the point that it actually reminds me more of a strong cider. It’s quite sour to the taste as well, and the flavour has a very pilsyness to it. On the whole it’s not really to my taste, however I can appreciate that it’s a flavour with depth and complexity, and to those who like this sort of thing, it’s probably a very well-crafted example. 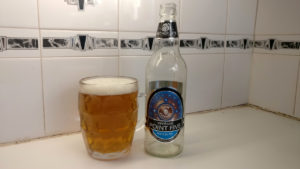 This beer had quite an odd behaviour when I removed the cap. It was very lively indeed, to the point that it would have overflowed if I had not acted quickly. As I poured it, the head came out in two distinct phases – there was an initial, conventional, fairly thin head, and then as I upended the bottle there was a sort of creamy yoghurty after-head that took a long time to drain out of the bottle. Most curious. The head does linger nicely. The smell of this beer is very inviting, it’s delicate and smooth and floral. The flavour, you’ll be pleased to know, lives up to the invitation. It’s easy to drink, and hoppy but not excessively so. I detected an aftertaste that didn’t quite seem to fit the whole pattern, but it was not so obnoxious that it could spoil what is otherwise a delicious and well-balanced beer that I think could earn a very broad appeal amongst ale drinkers of all inclinations.