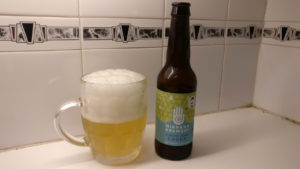 This is an insanely lively beer, as you can probably tell by the photo. When I removed the cap, it erupted like a silly geyser, and I managed to fill this pint glass up with 1cm of liquid and the rest of it froth. I took this photo once it had settled down to a slightly more sensible level. The head didn’t take too long to dissipate and vanish entirely.

The beer is pale and slightly cloudy. It smells sour, with a fustiness like a cupboard that hasn’t been opened for a while. Karen says “light and crisp, like a sauvignon blanc. Maybe I’m a beer drinker.” Seems to me that that’s the kind of thing that a wine drinker would say, no?

But yeah, it’s sour and winey. There isn’t an awful lot of elderflower in it, but to be honest there doesn’t seem to be much of anything else either. 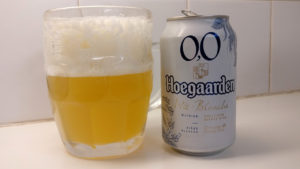 This is thick and creamy, pale and cloudy, with that recognisable medicinal Hoegaarden smell and flavour, a bit orangey and weird. It’s slightly less dense and intense than the regular Hoegaarden, but you know maybe that’s not such a bad thing.

On the whole, it’s a decent choice and I’d have it again, but there are other superior options in this space. 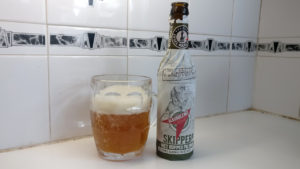 This beer has a dark, orangey colour, and is cloudy with a creamy pour. As you can see, it has slightly novel packaging in that the bottle is wrapped in paper. The smell is fabulous – really malty and warming. The flavour is also a grand experience, though perhaps a little more bitter than I’d like. It’s certainly not lacking for impact. 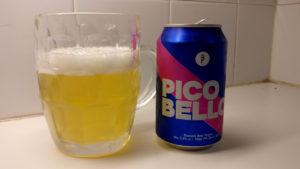 This is a hazy IPA with a pale colour and a reasonable head. It smells suitably fruity and sour, as you would expect from this sort of drink. However, the flavour is far, far sourer than the smell would set you up to expect. Karen is a big fan, and said “if beer was pleasant, that would be a pleasant beer.” It’s great, but for me, it’s not one of my favourites. 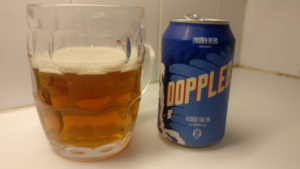 This beer has quite a deep amber colour and is clear with a head that is decent on pouring, but quickly fading. The smell is floral, but also with a dense darkness. The flavour is absolutely fantastic. I’ve remarked before in these reviews that there are loads of great alcohol-free wheat beers and light IPAs, and some decent lagers too, but the offerings for dark, autumnal beers are generally quite disappointing. This one, however, is a real winner in that category, and I can definitely see myself putting a handful of these in with my next order.