On to July! The first thing we did was to open box 8, which we should have done as soon as we lost our second attempt at May. This gave us 3 cards, similar to unfunded events, which would be shuffled into the player deck, and could be played against an epidemic to neutralise it (almost) entirely. There is, however, a cost to playing one of these. For one thing, you have to increase the panic level of a city. For another thing, each of these cards can only be used once, and must be destroyed immediately thereafter. I can envisage a situation where one of these could potentially save us from a late-game outbreak cascade.

Our win bonus for June granted us the choice of either adding some equipment stickers to city cards, or placing some roadblocks. We figured we’d probably go for the latter option, but since we didn’t have to decide until after setup is completed, we set this card to one side for now. 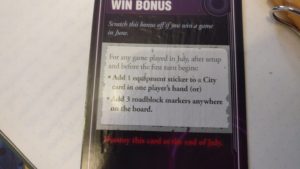 We then unveiled our mission for July. A virologist has gone missing, and we need to search for them in research stations in faded cities. The instructions on the cards here seemed to be incorrect, as we didn’t have all the tokens we were supposed to have. After some online research, we discovered that we were also supposed to open box 5, and indeed the necessary tokens were in there. 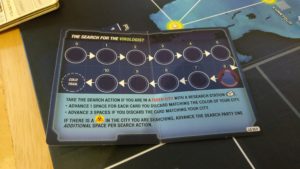 The search for the virologist

One thing to note about this is that with each epidemic, the goal token for the search moved on by one. Therefore, it would make strategic sense to try to do this as early as possible. We now had the following objectives, of which we needed to do three in total:

We felt that it made sense to prioritise the search for the virologist as we reasoned that this might give us other benefits in future games.

The setup for this game was so bad that we laughed. There was a huge, huge bias towards the Faded cities, with 11 of the 18 initial disease tokens landing in this region. 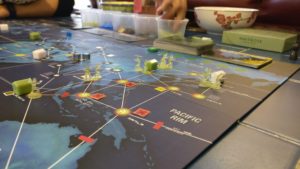 Lots of starting tokens in the Faded cities

This made choosing our win bonus a no-brainer. We deployed some roadblocks to try to contain the worst of the mess. We isolated Beijing entirely, and also placed a roadblock between Tokyo and San Francisco. While San Francisco is already Faded, we definitely did not like the prospect of Tokyo spilling over and turning North America into a crisis zone. 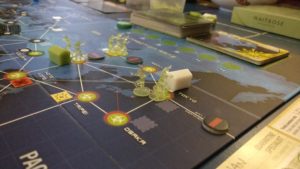 We played the same characters as last time, but swapped the players:

We began the game, and naturally our initial priority was to contain the situation in the Faded region. The first epidemic card came up and was for Mumbai. We were happy with this – it was well away from any other hotspots, and quite close to a research station, so wouldn’t be too tricky to handle. An infection occured in Shanghai, where Colonel K*D had ended their previous turn, so unless we could do something about that, they would pick up a scar at the start of their next turn.

The soldier quickly made their way to the military base in Shanghai, in order to put a grenade belt sticker on one of their city cards. This is an invaluable tool in fighting the Faded, though it’s not going to be so easy next time round, as now there are no free grenade belt equipment stickers left, we’re going to have to wait for one of the the grenade belt equipment cards to come up in the deck. With this grenade belt, they were able to ensure that Colonel K*D would be safe at the start of their next turn.

Ewan made good use of their character upgrade to check the top cards in the infection deck at the start of their turn. We gave them this upgrade back in March, but because of the 15 month interim period between games, we had forgotten entirely about it. It turned out to be very useful – they were able to predict when both Tokyo and Kinshasha were due up next, and both were on the cusp of outbreak already. With this knowledge, they placed quarantine tokens on both cities and averted a double crisis.

The search for the virologist proceeded extremely well, with both the Soldier and the Colonel contributing. We had a research station in Tokyo, so this was the location where it happened, and the presence of a quarantine token there also contributed an additional bonus to searching. Within a matter of minutes we were within one spot of our target. An epidemic occurred in Miami (again, this was a fairly lucky draw, as this wasn’t close to any existing danger areas) which pushed the search target back out one square, but as long as the quarantine in Tokyo held, it was still achievable on the soldier’s next turn. 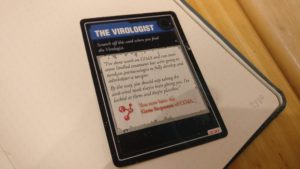 And indeed, we found them. We now have the gene sequence of COdA! We are utterly baffled as to the implications of this, but surely it will all become apparent at some point in the near future.

Meanwhile, we’d been gradually funnelling city cards into the hands of those who could make use of them. The Soldier can’t cure diseases at all, and the Colonel requires 2 extra cards, so it fell down to Jonesy the Generalist and Ewan the Quarantine Specialist. The yellow disease was the first to be cured, and at this point we had a general feeling that the board was mostly under control. 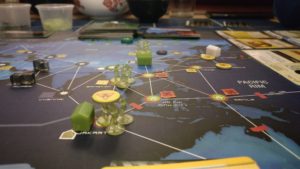 It’s not as bad as it looks 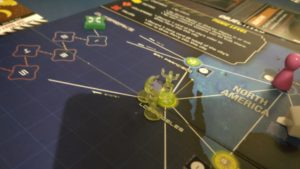 Yes, it’s true that LA looks a bit shaky. But that pink pawn is a soldier, and they’re about to swoop in with the grenade belt and clear out that city in one turn

At this point the time taken for us to take each turn increased significantly. We could sense that we were at a sort of tipping point, where victory was within our grasp, but we had to play smart and weigh up the options. By working together, we eradicated yellow entirely, giving us a second optional objective completed.

The next epidemic card came out two minutes later, and it was for the yellow disease, the one we’d just eradicated! Gammidgy was heard to utter “I think we’re gonna win”, as the blue cure dropped into place.

In the closing stages of the game, an epidemic in Delhi occurred, followed by the Delhi card coming up immediately thereafter. This was pretty bad as neighbouring Karachi already had 3 cubes in it, causing a double outbreak in these two cities. Their panic levels have increased accordingly. 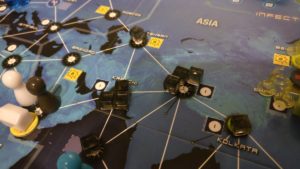 Had we been able to cure the black a turn or two earlier, this could have been avoided, but to be honest it’s tolerable. The state of the board, on a whole, looks okay. We’ve done a decent job of constraining the spread of the Faded, and there are only 3 Faded cities beyond the original ones. We feel like this is a pretty good showing. And while there are a few Faded cities that are now in a state of rioting, most of the cities don’t seem to have degenerated too much.

For our game-end actions, we did the following: 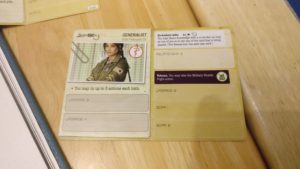 The Generalist is now a veteran

Which rules have we been getting wrong this time?

This seems to happen every time, so I’ve decided to make a dedicated section at the bottom of each blog post. Back at the start of May, a new rule was introduced. I wrote about it at the time:

There is a small increase in the infection rate of the Faded – now, whenever a player draws a city card that corresponds to a Faded city, one Faded figure gets added to the relevant city.

It’s a long time since we’ve remembered about that rule, if indeed we ever have. Oops. Next game’s gonna be a bit tougher, I guess.