Lots of people have had COVID-19 by now, as was always the long term plan of our government. A couple of weeks ago I can remember having more than one conversation in which I remarked that it was quite something not to have had it in this house yet. And despite the lack of any kind of interventionist deity, this immediately summoned the Gods of Covid Cussedness, who whispered in my ear, go on, take a train to Banbury, have lunch in a cafe with a colleague, visit a couple of shops. You’ll be FINE. 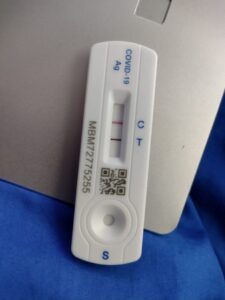 That was on the Thursday. On Saturday morning I was mostly a bit grumpy. In the afternoon, I fell asleep on the sofa and woke up feeling decidedly grotty. I had suspicions, but a LFT told me they were unfounded, so I carried on into Sunday, when the full headache and sore throat developed, and I did a lot of sleeping. First thing on Monday, I did a test and was unsurprised to see two lines. Like a pregnancy test, it’s no longer a scare once it’s real. I cancelled everything for that day and went back to bed, getting up to make and eat dinner, at which point Bernard rather crossly said, if you’ve got COVID, why are you eating with us? so I went back to bed and have been here pretty much ever since.

Here’s how it’s been for triple-jabbed me: tiredness, sore throat, headache, head cold, cough, sore teeth/gums, tiredness tiredness tiredness. About three days of pretty bad symptoms, but never as intensely awful as my reaction to the jabs. Able to do a bit of work on and off, much dozing and listening to audiobooks. Pete moved into the spare room/his office and has been sleeping on a zedbed and manfully claiming that he’s fine with that. I’m not fine with it, I miss him and I’m fed up of the bed, which is now covered with notebooks and biscuit crumbs. There’s no point changing this bedding until I test negative and he can come back. We wear masks if we’re in the same room as each other. We converse over Discord. In the evenings, he loads a couple of TV programmes on to a thumb drive and we watch “together” in our separate rooms, occasionally texting one another with our thoughts.

On Day 5 I did a LFT and the line was black and bold, just in case I thought I was malingering. I cancelled my work weekend in Worcester and couldn’t get a train refund. I got up and recorded a podcast, then slept all afternoon. Pete walked into town at lunchtime and brought me back a cinnamon bun. It was the most delicious cinnamon bun. I have had no taste/smell symptoms at all, for which I am grateful.

From Day 7, I have been testing daily, and the line is getting feinter, but it’s still there. It’s still a line that would, had I seen it on Day 1, have sent me into isolation. I google “am I still infectious after 10 days?” and “will I have COVID in my system forever?” and continue to stay in my room, with the daily exception, since the weather improved, of a daily walk of about one mile. I get breathless on zoom calls and have to pause mid-sentence; but I can stand up long enough to cook dinner without feeling awful. Most of the symptoms have eased off, and without a world in which we test our virus levels, I would expect myself to be back to normal life by now. But if it’s still showing up on a LFT, I’m not prepared to risk giving it to Pete and Bernard. Bernard has Teacher Assessed Grading exams all week, which are the Plan B for if COVID disrupts GCSEs again, so it was never worth the risk of them missing those. And who will run around after me if Pete gets sick?