I am very bad at getting rid of things. I’m like the anti-Marie Kondo.

Having read this, you probably now have a mental image of one of those people who lives in squalor, boxes upon boxes of old newspapers and tat lining the walls, the walkability of their house reduced to just narrow lines of dirty carpet amidst the piles of detritus, sleeping upon the piles of old football programmes on their bed, plastic bags full of human faeces in the corners, a dead cat corpse that is so old and dessicated that it no longer smells (and even when it was fresh, the odour was barely noticeable anyway amidst the rest of the stygian funk).

I hasten to add, this is not me, and this will never be me. As is so often the case, I open with a shocking statement, and then spend the rest of the blog post backpedalling from it until you are left with a feeling of being somewhat cheated. I pretty much invented clickbait.

First off, I have no problem with getting rid of things that are broken. If a thing no longer works, and can not be repaired, then I will bid it adieu.

What this means is that I’m not terribly worried about becoming a full-on hoarder. I think that to get to that state, you need to have the combination of never getting rid of things, with a high rate of acquisition. One without the other is generally manageable.

I have generally been good at getting rid of old bass amps. I don’t have a 100% success rate here, as my wide streak of nostalgia has prevented me from parting with the piece of crap that is my first ever bass amp, but with that exception, I’ve managed to stay on top of this one, and always sold on my amp once it’s superseded. I think that, in this case, it’s a question of size. When something takes up such a large amount of room, it’s much easier to look at it and say “I’m never going to use that, and keeping it around just in case is not worth it.”

A few years back I also went on a bit of a cable-management spree. As is probably the case for anyone who is a bit of a computer geek, I had a huge collection of spare USB cables, power cables, video cables, and other paraphernalia. They were taking up a lot of space, so I made a project of collating them by type and identifying duplicates. In most cases, I felt like there was value in having one spare but not multiples, so I kept one and gave away the remainder.

I also have, in the past, sold (or given away) large numbers of CDs, DVDs and VHS tapes. It felt justifiable at the time, but I still find myself regretting parting with one or two of them. I think that, to understand this better, it’s time to burrow into my brain and start exploring The Why.

Part of this stems from a logic of “that thing might be useful again one day, it’s worth keeping around”. I’m going to show you an example now. But before I do, I want to make a small prediction. Ever since the second paragraph of this blog post, you’ve probably been thinking “okay, this all seems reasonably rational.” But this next example is possibly going to be the thing that makes you think “wow, I spoke too soon, I think this guy does actually have problems.” 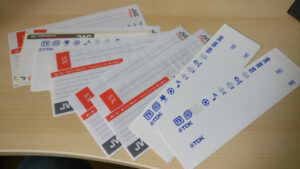 These are the adhesive labels that you got with blank VHS cassettes. This particular vintage dates back to the ’90s, or maybe early ’00s. I haven’t owned a VHS player for over a decade. But once upon a time, I started holding onto the spares because they seemed like they might be useful one day. Maybe those little icon stickers could be useful in some other context? Or maybe I’d have a situation where I needed to reuse a particular tape for the thirtieth time, and I wanted to have a fresh label for each recording? These stickers are perhaps one of the oldest items in my collection, but I knew exactly where I’d find them, and if you wanted me to keep showing other such examples, I could do so all day. But this segues nicely into the second part of The Why.

I seem to be quite a nostalgic sort of person. I like to look at the adhesive labels and be reminded of the person I was back then – how he’s changed, and how he’s stayed the same. He had his flaws, of course, but he sure did like to organise his VHS tapes. I like to look at an old CD single from the 90s and remember all the time spent in music shops in Lincoln, and the people I used to sit around with and listen to indie music. I guess I’m afraid that if I don’t have these physical items to tie me to the memories, then I’ll lose them forever. And I think that I’m justified in believing this, because I know that it happens. I have precious few artifacts from my three years at university, and it really bothers me because I find that huge swathes of that period are collapsed down into the few brief glimpses that I can still remember, and I feel like if I had more things from that time then I’d be able to stimulate and retain more of those memories. Soon after finishing my degree, I found myself regretting that I hadn’t taken more photos, especially of the mundane things. I wish I had taken a photo of my bedrooms – not to highlight any particular detail, but just as a record of the spaces that I spent so much time in. I suppose at the time I was living very much in the now, and not thinking about what Future Pete would want.

As an example of how it manifests itself, my home recording studio setup has evolved throughout the years, from a tape-based 4-track, through a minidisc-based 8-track, and now to a studio that’s entirely on my computers (desktop and laptop) that has none of the limitations of either. I’m never going to use the 4-track or 8-track again, I can be certain of that. But they both still work, and so I still own them both. I suppose I’m afraid that if I get rid of them then I might also lose access to the memories associated with them. To which you will reply “why not take a photo, and then get rid of them?” To which I reply that I now seem to have the opposite problem, which is that I now have a 45 GB photo archive, and putting photos in there in the hope of retaining memories is about as optimistic as homeopathy. I did used to be quite methodical about curating my photo archive, back when I used a standalone digital camera, but as I’ve shifted towards using my phone more, the process has fallen apart.

It seems that I will keep things under the following conditions: