At the weekend, I found myself going on a surprise visit to Diamond. If my memory serves correctly, I first heard about this at Reading Skeptics in the Pub when Stephen Curry was doing a talk about viruses.

As you may have guessed, when I use the word “bright”, I’m understating it somewhat. Brighter than the sun? Yep. How much brighter? Oooh, about 100 billion times brighter.

So, electrons, right? They get generated in an electron gun, which is surprisingly small, but then after all it’s only generating electrons. Not so tough. They then go into a linear accelerator, which looks a bit like this… 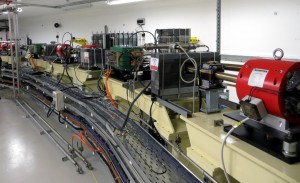 …and cranks the little fellas up to about 100 MeV. They then enter the booster synchrotron, which is a circular track where they rattle round a few times, accelerating under the influence of shitloads of magnets until they hit top speed, about 3 GeV. Wherein they are allowed to divert into the storage ring… 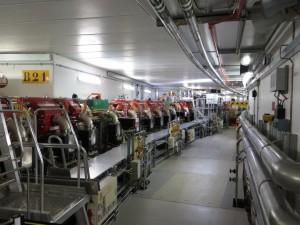 The channel in which the electrons themselves travel is incredibly narrow, as you would expect. Their trajectory is precisely maintained by more of these chunky magnets. The circuit is 562m in circumference. How many times, would you guess, do the electrons complete a full circuit per second? I know the answer. It’ll make your pants go moist.

Once these electrons are going nice and speedy, it’s time to put them to work. At 22 points along the storage ring (32 when it’s finished) there exists apparatus to encourage the electrons to emit their rich, luscious light. This is then guided down a beamline, which comes off of the storage ring at a tangent. 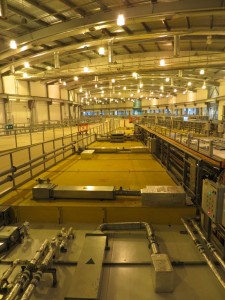 The beamlines consist of three main rooms. The first contains the gear which processes the light, selecting for specific frequencies if required. Most of the work done at Diamond uses x-rays. 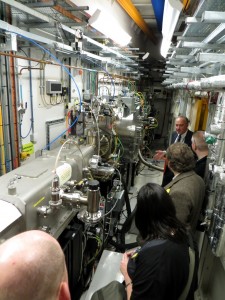 The second room is where the sample is placed and the experiments are run. You would not want to be in this room when your beamline is switched on. 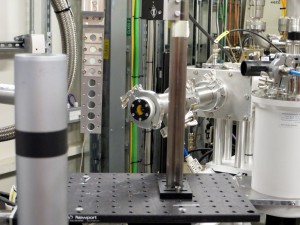 And the third is where the comfy chairs and computer screens are. That’s where you sit and drink tea while science happens in the next room.

It takes a lot of dedicated, enthusiastic people, and a lot of incredibly funky equipment to manipulate our world on such a tiny level, to keep those tiny little particles spinning round at such phenomenal speeds on such a precise course so that we can continue to push our scientific understanding of the world to more and more refined echelons. Some people don’t give a shit, but they’re going to get the benefit from it anyway.

If you’re interested in visiting Diamond, here’s where you need to look.

These photos were taken with a Canon PowerShot SX260 HS and lightly massaged using the GNU Image Manipulation Program.