Here at Casa Uborka, we have been making pizza together for the best part of a decade. Pizza is Bernard’s favourite food without a doubt, and he glowed with pride when we told him about our holiday in Venice, when we ate pizza twice a day for a week. 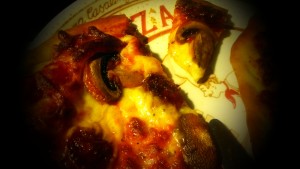 Over time we have refined the recipe, and now we regularly find ourselves nodding and congratulating each other on the best pizza ever. The pizza has three basic elements: the base, the sauce, and the topping. Here’s how it goes:

Pete has always been the bassist, though this may change in the future. We have always bought a packet of pizza base mix (about 75p), mixed it up, and used it immediately. We have progressed from a standard pizza baking tray, to a tray with holes in, to a pizza stone. The stone has to be heated up in advance, but if the first thing you do is put the stone in the oven, that works just fine. The resulting crispiness fully justifies this refinement.

The latest development in house pizza-ing is actually to make the base from its individual ingredients. Here’s a recipe from Waitrose magazine, yes that issue with Pippa Middleton leering at you from the front cover. 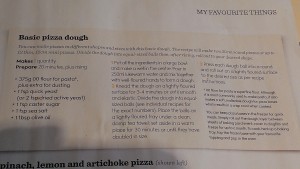 If you follow those instructions exactly, it comes out lovely. This makes two bases, and if you freeze one, be sure not to mistake it for shortcrust pastry and defrost that by accident instead.

I’m the saucy one. While pizza recipes generally seem to think passata or even, heaven forfend, tomato puree are sufficient for the sauce, I prefer to whip up a little sauce using finely chopped onion (or shallots), garlic and tinned chopped tomatoes. If there’s any pesto in the fridge I usually throw some of that in as well. One tin of tomatoes makes enough sauce for two pizzas. Again, the excess can be frozen, or used in whatever you’re making tomorrow. 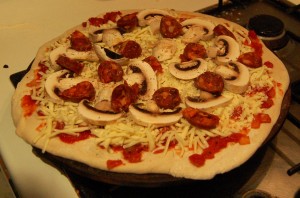 We take turns at topping. If Pete is allowed to do the mozarrella, he eats more than he really should, claiming that he is “making it even.” Back in the old days, we used to pile the pizza with all sorts of nonsense: peppers, sun dried tomatoes, spring onions, ham. But the classic Pizza Uborka is mushrooms and chorizo, with a light sprinkling of oregano. The only likely variation to this is if we have a bit of nice cheese to use up: goat’s cheese, halloumi, and roquefort have all put in an appearance.

The pizza goes in at 220 for 14 minutes, during which time you can relax with a glass of wine, flick through a magazine and wonder what Pippa Middleton can possibly know about preparing food, or check twitter.