Last September, I stopped putting up barriers, downloaded an app, and went for a run. The last time I went for a run might have been when I was 12. I’ve thought about it a few times since, but you know, thinking’s the easy part. I don’t really do active stuff much if I can possibly help it, though I find that I’m more inclined to walk or cycle short distances rather than take the car.

So I did this run, and I thought, wow, I didn’t die. Awesome. And a couple of days later I did another one. And I kept going through this programme, not always three runs a week because life sometimes gets in the way, but often finding myself really looking forward to the next run, and getting a bit fidgety on rest days. I experienced a few stiff muscles, a sore knee, shin pain now and then, and got loads of support on reddit and twitter.

In November I ran week 7 day 3 with Pete’s sister, who is fit, and made me run faster than usual. She also told me to get proper shoes. I got those in Sweatshop, where they checked my gait, which was pretty good. By December I was just about running 5km, but my calves were really starting to hurt, and I was slowing right down. I knew I needed to stop and recover for a week or two, but I had signed up for a race on 16th December, and I was so determined I was going to do it. 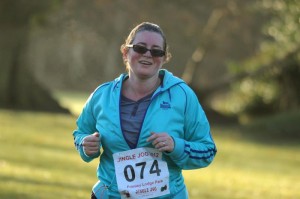 I did it. Very slowly. I came 96th out of 111 runners, some of whom were pushing prams. I felt ashamed of being so rubbish, and elated at finishing at all. The next day I caught flu and was in bed for nearly two weeks, taking painkillers and sleeping.

When I eventually got out of bed, my leg still hurt, which didn’t seem right considering the prolonged rest. My GP referred me for physiotherapy, and the physio scolded me for not stretching enough, admired my trainers, and massaged my calf muscle with fingers of steel. I asked her if I could go for a run, and she said only a little one, and I was to stop if it hurt.

At the beginning of February I went right back to the start of the c25k programme, thinking I would skip through it quickly because it would be easier this time, but it isn’t. Partly because I’m paying more attention to what my body tells me, and partly just because it really isn’t any easier this time around, I have gone more slowly. My running pace is about the same, but I repeat more runs and take more rest days when I need them. I stretch more, even on days when I haven’t run, because that’s what the physio told me to do. I find that I recover quicker after runs and in the walk intervals, and I don’t have as much of a mental battle to keep going through the run intervals [yet: week 6 day 2 at time of writing], but it’s still hard.

So now I realise that I’m never going to be a brilliant runner, I’m just a slow jogger. I’ll get back to 5km but I cannot imagine this body achieving more than that. I’m still really proud of myself for continuing to run. Also, my shoes are cool.

Update: This post has been sitting in draft for a month while more interesting things happened. Last week I signed up for the National Lottery Run, and then sprained my ankle.

5 thoughts on “Running Out”