Today’s activity consists of spending more time driving to and from Scarborough, than we actually spend in the Sea Life Centre itself. This is because the SLC is fairly similar to all the other aquariums, but with extra otters. The otters don’t do anything much. The SLC is extremely crowded, as one would expect during half term week. There are a lot of dark tunnels full of big people, little people, and pushchairs. Happily my enochlophobia doesn’t really manifest itself until we are about to leave anyway. This is no more than about an hour after we arrived (give or take 20 minutes of queuing to get in despite advance ticket purchase). I don’t really get aquariums. There are rude pulsing jellyfish, scruffy-looking penguins, and mean-faced sharks. They don’t race or crash or talk. We look at it all, and then we leave.

Mum and stepdad, having been sent a different route round the centre with the wheelchair, are already sitting in the car looking cross, which means there is no chance we can go back inside for a round of mini-golf, as requested by Bernard. They bicker all the way home about how and why every other driver on the road is getting it wrong.

Here’s a picture of Bernard eating a gravy-filled yorkshire pudding as big as his face: 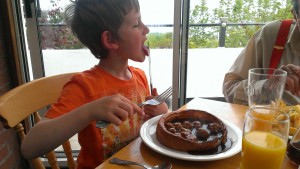