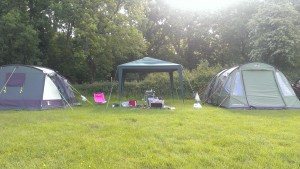 It was never quite clear whether we were in Wiltshire or Dorset, but it was not particularly important. At one point, the sun came out, and I took the above photograph.

Last year we dragged the Gammidgys to Abbey Home Farm, and this year they introduced us to the delights of camping with bison. There are five of them: two adults and a whole bunch of children. Their tent is even bigger than ours, and they had the sense to bring a gazebo to huddle under during the heavier downpours.

When we arrived on Friday night, all the children ran around screaming for hours until they were tired and fell asleep immediately they were put to bed. We made a campfire and sat around drinking wine. At 5am Bernard woke everyone up complaining he was cold; I applied a blanket and the residents of our tent went back to sleep and enjoyed a long lie in. The Gammidgy tent was less fortunate.

It had rained heavily in the night, and continued to drizzle throughout the day. I made porridge for breakfast, then we visited the shop, where the woman glared, growled, overcharged us for camping, then told us off for nicking logs off a large pile in the middle of the camping field. They’re not meant for you. Owing to the lack of a sign and the fact that they were in a pile in the middle of the camping field, we had failed to figure this out. She charged us for the wood, which we felt gave us free reign to have as many more as we wanted. She also insisted on charging us for the “farmyard walk,” so we set off to see some bison at close quarters. One bull bison apparently weighed over a tonne, and looked as friendly as you might expect a one-tonne woolly cow to be. There were goats and noisy happy donkeys, raccoons up a tree, and two majestic eagle owls, who treated us to a conversation after dusk. The children did all the stuff children are supposed to do in the countryside: rolled in fields of buttercups, hid in the hedges, climbed up piles of manure.

Meanwhile some Young People arrived and pitched tents at the other end of the field, down a slope, which happily reduced their noise levels. Realising this, they decided to move up the the very centre of the field to make a fire and sit around drinking beer and swearing. They were utterly hilarious, or so they found themselves. We stayed up late trying to outdrink them, and then ran out of booze and went to bed. I installed earplugs (never leave home without them) and went to sleep, but they disturbed Bernard, who began to cry because he was so miserably tired, at which point I strode over and politely requested that they shut the hell up. To my surprise, they did.

Sunday was dry, which is what you want on the day you have to fold your tent back into its bag. The children did their last bit of playing in mud and hitting each other with sticks, the grown ups figured out whose wooden spoon was whose, then unpacked and repacked the car to find a wallet that was still in one of the tent pockets (no names!). After this we went to get a pizza in Shaftesbury, which proved to be a hopeless plan because the whole of Shaftesbury had gone to church. There is no better way to enrage two families of skeptics than to deprive them of pizza for religious reasons; after all it was fathers’ day, goddammit, so we drove to Salisbury, where Strada added a finishing touch to the weekend by giving the children fathers’ day cards to colour in: a pink princess for the girl, superheroes for the boys, and a complete dearth of punctuation.