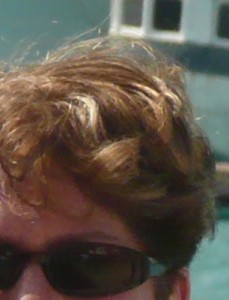 Yes, but that wasn’t the plan. When D and I moved to this Montreal suburb in 2000, it was on the understanding that after a year, D would open his company’s next facility in Boston. He was still scouting locations when the 9/ll attacks hit. Everything was put on hold. The company has been bought out by an American firm and we’re here for the foreseeable duration. I like the arts,food and festival scene in Montreal. We’ve made some very good friends here, but the political culture is blinkered, corrupt, and economically poisonous. I would move tomorrow.

Hell, no. Wait. Anna would, because she’s met me. She can attest that I am neither cartoon, nor schnauzer, or only a little bit of either. I have deliberately acted to keep my face off the net. I worked in television for many years and hated doing standups. I couldn’t see the point. I never believed I was the story; the story was the story and how I told it was already adding a degree of subjectivity. Standups were another layer of theatre. When I started they were just being introduced ( yes, I’m that old) and I managed to go six months before the station manager noticed that I was not visible in any of my reports. That was the end of that. I like the freedom of partial anonymity. Once my face was on TV, even in that minuscule market, I couldn’t go anywhere without being noticed. Every promotion brought more of that. I ended up moving to radio.
Here on the net, I still have that small degree of freedom that would have been lost had I decided to use my real name or image.

It’s a toss-up between the smart phone and WiFi. Since I don’t have a smart phone, I’m voting for WiFi. I don’t have the phone for two reasons, the chief one being outrageous data charges in Canada. The second one has to do with the fact that I know if I had the phone, I’d never be able to get off it. I do have a small Android tablet that relatives gave D as a Christmas present. D has no interest in it. It is crap. It is enough to carry some books and help me find what I need when I’m away from home. It’s the WiFi that makes the difference, not the tablet.

Some of 2008 and almost all of 2009 was spent long-distance designing a house for an old client. Everything. Inside and out ( meaning walkways, gardens and lighting). Everything–right down to the light switches. He’d started by saying he wanted to redo the kitchen*  of this +100 year old family home, but that soon expanded to a complete overhaul. Instead of razing it and starting over, he had it gutted, maintaining the front facade and foundations while expanding overall square footage by close to 100% so that he could still say that the house was +100 years old. It was the most fun I’d had in years and the result was, if I do say so myself, pretty fucking awesome. No, no after pictures. It is my best memory of him.
* ( I convinced him to hire a specialized kitchen designer for this– and still regret it, because it’s a bougie Real Housewives Of the Nouveau Riche display piece and the only room in the house that doesn’t flow)
Running in second place–  making a yeast bread for the first time this winter.

Tim wanted to ask you

Starting my own blog drew me into a warm, welcoming online community. As someone with a relatively restrained online presence yourself( unless I’m missing something!), What was it that first drew you into this particular virtual community of bloggers. Humour me, I’m fairly new here.

I first became aware of blogs sometime in 2000, while recovering from a back injury and unable to work. What I saw didn’t impress me much. Canadian blogging was almost non-existent and American blogs, at least the ones I saw, were the equivalent of corner street preachers and political loons. After a trip to see friends in England in 2001, I became a daily reader of The Guardian. In 2002 the Guardian ran a competition that some of you will remember “Best British Blog”. What an eye-opener. Naked Blog knocked my socks off and led to Troubled Diva, who led to Swish Cottage( defunct) Ian( dead) and then Green Fairy and Red Boat and Unreliable Witness, Toni, MBIAT, Lucy, on and on and on it went. It was Christmas every day. I was impressed by the creativity, writing skill and  newness of it all. What hooked me for good were all these individual voices coming through with few if any filters.
Have you never been tempted to hang your own life out onto the internet for public consumption? Even behind an alter-ego?
Oh yes, many many times. What put me off in the beginning, and still does a bit, is my total lack of webpage building skills and the lack of anyone around me that could help. I could have paid someone, but I’m too cheap for that. I can barely see my own typos, so image me coding? Haaaaaa. Then I realized that the kind of blog I would want to write would cause me no end of trouble in my work and private life, even with names changed. Girl With a One Track Mind convinced me there is no guarantee of anonymity. Then work became all consuming and all I did all day was write and and talk and the last thing I wanted to do was write more.
I told myself back then that blogging would reach a crescendo, then popularity would rapidly fall away as interest was grabbed by something else, and then slowly build again to core of smaller but more skilled bloggers. At this point I would start blogging. So I haven’t ruled it out. I’ve promised myself and few others that I would start writing again. Fiction this time. I need to get on that.  Oh look. Shiny.
I once had the honour of creating a mix tape for you. I seem to remember that you rolled your eyes at some of Billy Bragg’s Rhyming on ” Levi Stubbs’ Tears”. Who is your favourite lyricist? What’s your favourite lyric?
Did I? How rude of me. I don’t remember. Wait,now. Here we are. I think that’s mild eye-rolling and I stand by it.
I don’t have a favourite lyric or lyricist.  Honestly.
But Leonard Cohen is a master and ” I ache in the places where I used to play” is one of the greatest lines ever. And Joni Mitchell’s Blue is one of the best albums ever recorded with River’s ” I wish I had a river I could skate away on” speaking directly to my soul.
There are many more. There’s a ton of talent out there.
I’m going through a phase right now where the lyric is less important to me than the sound and the rhythm;I-‘m going through a BIG Nile Rogers rediscovery this summer.

Peter of Naked Blog fame. I’ve missed him so much.
1. When you started Naked Blog, what were your expectations, how did they change over time and what did you learn from it all ?
2. You’ve had a consistent love/hate relationship with the internet. Where would you put yourself on that scale now and why?
3.When you closed Naked Blog you were immersing yourself in your latest passion, WoW. What holds your attention today?
4. What are the chances of  you sticking around Twitter this time? ( I’m emotionally invested in your answer-)

10 thoughts on “Where Are They Now? An interview with asta”