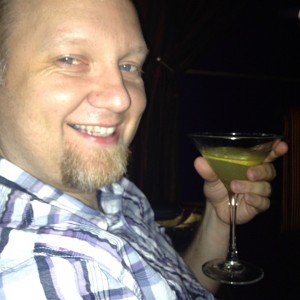 Nope. Back then I was living in Hamilton having moved back to Scotland from Aylesbury a couple of years beforehand. The house in Hamilton was my first with a garden, a suburban semi-detached in a nice quiet family area. It was a great idea, to have a garden to sit out in on a warm evening, ahhh yes, we had it all planned.
The reality is, of course, that any time we had any good weather we had to attack foot high grass and weed strewn borders. It was NOT relaxing.
These days I’m back in a flat in a nice part of Glasgow, there’s a spare room for guests, and I’m not far from the thriving West End (think students and money).
My blog has moved too, from www.snowgoon.co.uk, to www.informationallyoverloaded.co.uk (god, I thought that was so smart!), to www.onemanblogs.co.uk and, today, resides at www.gordonmclean.co.uk.

Probably, my features haven’t changed. A bit heavier, less hair but overall much the same as I was back then. New tattoos are the most obvious thing but they aren’t always visible so hopefully I’m recognisable! (evidence of this would be being spotted by Luca Belletti (http://www.lucabelletti.com/blog/) whilst we wandered around Glastonbury last week).

The iPhone. A tiny computer in your pocket that, given the popularity of smartphones these days, has changed the way we interact. Without them, would Twitter be as popular? Instagram? I doubt it. Smartphones have opened the world to social media.

I still have a blog, and up until the turn of the year I had two. I’ve since merged them all under my ‘ego-domain’. I still blog now and then, but not as often as I used to. Is Twitter to blame? Possibly. The excuse is that I don’t have enough time, which begs the question, when did I ever?

Weirdly, my divorce. It wasn’t pleasant but it certainly wasn’t acrimonious. My ex and I both realised it was time to part and so we did, all on good terms and are still friends.
It really did feel like a new beginning and I’ve embraced my new life, challenged myself to try new things. I turn 40 in a few months and I feel lucky to be where I am. I have a whole new life, full of interesting people and possibilities.

–          You will probably be doing this straight after returning from Glastonbury. I’ve never been (though I’ve been to a few other festivals, both in the UK and abroad). What are the best and worst bits of the Glasto experience, particularly when compared to other festivals?
I’m determined to write a longer piece about Glastonbury but for now… The best aspect of Glasto is the atmosphere. It’s just so chilled out and relaxed, unlike a certain Scottish music festival. The worst bit is the same as the other festivals, the toilets.
–          Your blog has contained quite a lot of personal revelation over the years, particularly about relationships. Well, I’ve perceived that it has – I’m sure that there is much that you have not said, of course, and rightly so. Have you found that putting some of that stuff on to the blog helped you in any way? How does it feel to go back and re-read that stuff now? Or do you not go back to read it?
I do go back and read it and sometimes I cringe and wonder why I posted what I did. For the most part I’ve always found it cathartic to write things down. I can struggle to talk about things of an intimate nature (something that has improved vastly recently) so writing has always been a part of my thought process. For me I always viewed my blog as personal, I’m a pretty open guy (some would say blunt/naive) so I’m happy with everything I’ve posted.
One item to call out, when I wrote about Depression I received two emails from people I didn’t know, and haven’t heard from since. They weren’t bloggers, just people who stumbled across my posts somehow. Both said much the same thing ‘thank you for writing your post, it was good to read that someone else has similar thoughts and experiences’. That was quite early on in my blog (August 1999) and even now, reading it back, it seems like a lifetime away. Those emails did encourage me to continue to share.
–          Finally, the Scottish question: Irn Bru. Why?
If you need to ask, you don’t need to know the answer. See also, Potato Scones, Square Sausage, and Tunnock’s Caramel Wafers.

Next up, I’d like to hear from the overly tall man once known as SwissToni, now swisslet (http://www.swisslet.com).
I’d ask him:
1. You don’t half blog a lot about music, what is the big deal, why is it so important to you?
2. It’s been a few years since your MS diagnosis, you’ve described yourself as ‘stoic’ in the past, and god knows you are way more active than me, what keeps you going?
3. What was the last blog post you commented on, and why?

6 thoughts on “Where are they now? An interview with Gordon”