Here’s some cool things that Karen and I did in London at the weekend:

We went to Albannach which is a whisky bar in Trafalgar Square. There I tried Ardbeg Uigeadail for the first time, which is a whisky that I’ve been longing to sample for a fair old while. It did not disappoint. 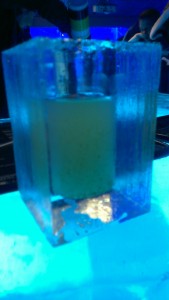 We also went to Icebar where the air conditioning was most definitely working. It’s pricey to get in, so you wouldn’t go there regularly, but it’s a bit of fun. We had to buy Karen some special shoes for the occasion ((and in the process, witnessed a very poor attempt at shoplifting)), as I thought that her flipflops were a bit impractical. It’s a place with excellent standards of hygiene – the glasses are only ever used once. Because they’re made of ice!

Here’s some cool things that Karen and I didn’t do in London at the weekend:

We didn’t eat dinner in Wahaca. We were looking at an hour plus wait for a table, and by then it was already after 9pm, so we ended up around the corner in a very noisy steak restaurant instead, where they made us cook our own food on hot stones. I grumbled about this for a while, before managing to get over myself.

We didn’t go to Bowie Is at the V&A museum. As this exhibition enters its final week, the queue for tickets was approaching ridiculous proportions. This was to be my early birthday treat, and ostensibly the entire reason for our visit.

We decided not to go and see the Leandro Erlich exhibition, as after having spent half an hour in a fruitless queue in the morning, the threat of having to spend more time queueing for exhibition tickets made Karen want to run screaming into the depths of Hyde Park, never to be seen again.

In a funk, we started fishing around for other ideas for things to do. Subsequently:

We didn’t get to see the conservatory at the Barbican as it was closed for a wedding, and: 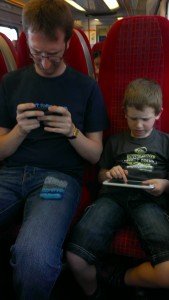 We didn’t go to Smithfield Market as it is closed on Saturdays.

At this point, Karen declared her disappointment.

However, we did go to the Museum of London. Damn interesting place, which tells the story of London, principally its people, from then to now. After the previous 5 hours of fairly consistent disappointment, it actually managed to put the smile back on our faces.

And then we had dinner at Wagamama and came home on the train.

2 thoughts on “Short trip to London”