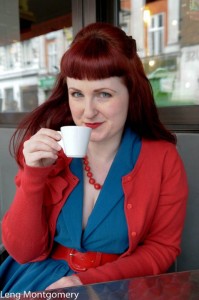 No, I was living in south Manchester back then but have since moved to south London. Never thought I’d like living in the capital, but this big beautiful city has proved me wrong. Since 2006, I have been busily trying out as much as I can of what London has to offer. [Waits for Lyle to make a crude remark.] I am, however, still living with the ever wonderful Topper.

Possibly. Depends on whether or not you still read my blog. My fashion sense has changed a lot in recent years, and my hair has changed quite a bit since 2005 (when I had no fringe) and 2004 (when I was blonde!), but my face is still relatively untouched by the ravages of time. Also, if you follow me on any form of social media these days you’re probably quite likely to recognise me because I do have a fondness for selfies. Years ago I had a webcam – now I have a smart phone and Instagram.

You’re probably asking the wrong person here. I pretty much have no concept of the future, unless it’s fictional and on a large screen in front of my face. I rarely ever make anything that could be termed a long term plan, and pretty much just see where the wind takes me. However, now you’ve pressed me for an answer, I reckon that the concept of shame will eventually disappear entirely, as everyone has every aspect of their lives recorded for posterity and easily searchable via Google. No one will be able to deny their sordid past and so everyone will be in the same boat. That’s probably a long way into the future though!

I do indeed still have a blog. It’s now called Rarely Wears Lipstick (although my old vanity domain still redirects there) and I still write about whatever captures my interest, although my writing has improved immensely since I started blogging back in 2002. These days my site is more like an online magazine and less like the ramblings of someone with an overinflated ego sat in their living room poking at a laptop, even though it is technically still that. If you are so inclined, you can find more self-indulgent waffle from me on Twitter too, where I am @lipsticklori.

Well, my birthday’s in January and I need to have a research proposal for my MA dissertation finished and presented by December, so I guess that counts. Other than that, my innate lack of ambition and planning skills mean that health and happiness are pretty much my only goals, and they both need to be maintained rather than achieved. Thankfully.

Clair asked: If you could go back and tell a 16 year old you something, what would you tell her?

Ooh, good question! I’d say, “don’t listen to your teachers when they tell you to take A-Level Maths. It’ll be a waste of two years. Go for English Language instead. You’re worried you’ll get Mrs Jones as a teacher again, but she’s actually far nicer than she seems. She only told you that you’d get a D at GCSE because she knew it would make you work harder.” Mind you, a different choice of third subject might end up changing my entire future. Maybe it’s best not to cross your own timeline, eh?

Clair asked: What’s the most interesting thing you’ve learned through your fashion MA?

The MA History and Culture of Fashion course at London College of Fashion has, so far, taught me a great many interesting things. I now know how bespoke suits are made on Savile Row, how to analyse fashion imagery, that there are many more archives of garments in the world than you could possibly imagine, and that no amount of reading can prepare you for how it feels to handle something that is hundreds of years old. The most important thing I have learnt is probably that my past studies, my current hobbies and my lifelong obsessions do all meet in a place where fascinating research happens. Hopefully I will be able to add my own to the mix sometime soon.

Clair asked: You’ve got a quite a lot of twitter followers, does that change the way that you use twitter?

It think it’s probably the number of people I follow that changes the way I use Twitter. I treat it as a place to broadcast (in classic microblogging style), and also like a whole load of chat rooms that I can duck in and out of all day as I wish. I follow people I know in real life, folk whose blogs I read, people who tweet interesting links, brands I adore, magazines, journalists, and folk I don’t know but who were retweeted and their bios made me laugh. That’s over 400 people who I can’t quite keep up with, so there’s no way I can worry about catching every tweet. It’s not like I say different things because more people are listening though. I’m just as likely to say daft things as I was when I first joined Twitter!

I’d like you to interview Cat, aka @koshkajay. Can you ask her:

6 thoughts on “Where are they now? An interview with Lori Smith”