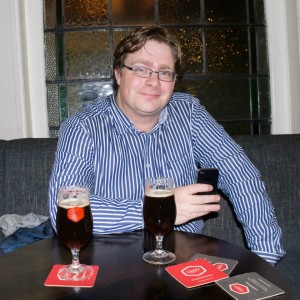 Not physically or mentally.

So, 2004/2005 I would have been “living” in Bedford, which I’m sure is a perfectly nice place, but for various reasons wasn’t good for me. I moved to London in 2007, and have move four times in London since then. Currently in Bounds Green. I’m not sure I can imagine not living in a place with 24 buses and a working transport network anymore.<

I do! In the same place, even. http://www.aquarionics.com/ still exists with all its archives since 2001, although it’s got less and less of a personal thing and more and more of a thing I *mean* to update and then fail to do so, which does seem to be a recurring theme in these interviews. I post pointless wastes of time to tumblr, and shorter wastes of time to twitter (both as Aquarion). In theory the thing I’m actually working on is FactionFiction.net, but that never seems quite ready to launch, somehow.

My excuse for not writing the blog has been the Book. I want to get it done and redrafted.

I also want two million pounds. And a pony.

Many people now keep their blogs for longer, more thoughtful pieces, and use their Twitter accounts for short day-to-day stuff. Do you have any thoughts on the impact that this has upon their blog’s narrative? What happens when Twitter eventually goes away, and all those archives of micro-blogging are lost?

I’m a geek, so I don’t trust Twitter with data I care about, so I archive my tweets and as much as my external-data as I can to http://www.nicholasavenell.com/, but even that loses the conversations I have with other people.

My blog’s lost its narrative. From when it started – while I was at uni – up until I moved to London it was a fairly regular diary of my life, and where I was and what my hobbies and thoughts were. It’s been really useful and occasionally even interesting to go back over archives when I’m trying to remember when I thought this, or when this happened, or what lead to decision X, but as I’ve drifted more and more into impersonal and more “polished” articles, it’s lost the personality, it’s lost the diary aspect, and it’s lost the use it could have for future-me as an archive of history. Already, I’m missing the entries I would have written five years ago when I moved to London and started with my first Startup, and I suspect in ten years I’ll miss it even more. But when it became something I put on my CV as a long-term project, it also became something I couldn’t put my frustrations and hopes onto, because the people who controlled my frustrations and hopes were occasionally reading it.

And then there’s the day when I got called into the boardroom because my blog was ranking higher for the company name than the company site was, and I had just posted a long screed about how much I hated the technology platform we were using.

It’s hard to maintain the impersonal nature of a personal blog while it remains public without basically bollocksing up bits of your life, and the blog fell before the life did. So I end up without a record of the non-blog ways I bollocksed stuff up too 😉

Every so often I try to shift its gear and start updating again. I should do that more.

You used to have an Android phone and now use an iPhone – is this a simple case of practicality, or do you have an idealogical / emotional investment?

I’ve gone from iPhone from Android back to iPhone again over the last six years or so. I’d love to have an ideological reason to say how much iPhones are better, but it’s mostly just that they work better for me. Androids can do some things the iPhones can’t, even cracked open, and have far more customisation options, but the UI fragmentation gets to me, the device variety – IMO – means interfaces have to be designed to work at too many screen sizes to be great at most of them, and a lot of things just require more faff than I can be bothered dealing with in my device. Other people’s mileage varies, and the cross-pollination of features benefits both sides, wheras the ongoing political war is of no more use than Vi vs Emacs, WordPress vs Typepad, or Chocolate vs Vanilla.

You use your blog a lot for games reviews these days – what’s, in your opinion, the best game you’ve played since 2004/05? What’s the most disappointing?

Best game in the last ten years? That’s something of a range. It’s a range with Half Life 2 and both Portals. An entire console generation, too.

The games I’ve put most time into – says Steam – are ‘Lord of the Rings Online’ and ‘Planetside 2’. Neither of which I count as being fantastic games (and both of which have a tendancy to leave their launchers running, which confuses the count). I really don’t know.

It’s probably City of Heroes, which was an MMO that shut down without ceremony last year. A real sense of how a superhero world should feel was built on with one of the deepest character generation systems seen, and it was the first game – and still one of the few MMOs – where just travelling around – superspeed, flight, hulk-style jumping – was a joy in and of itself. It’s one of the things I love about open world games, just the ability to wander around seeing what the designers have done. Somewhat ironically, it’s something most MMOs fail at, because every area is doomed to have its own special variety of wandering monster, and without a top-bastard level character it’s impossible to just walk around.

My favourite game right now is The Secret World. The combat’s complex and gets a bit bastardy towards the higher levels, but the story and the world I love a lot. The Walking Dead is a fantastic example of new ways to tell stories using games, and if I want to pretend to be a space marine and shoot all the mens, that’s what Planetside is for.

Most disappointing, Black & White has my all-time record, but predates this. So lets go for SimCity, released this year. Apart from the server problems at launch, they simplified a lot of the simulation areas, but made those simulations deeper, but still not as deep as they claimed to make them. Then they shrunk the available map space to smaller than any Simcity game since the original, and removed all of the non-urban build options. So you ended up with a less complicated, less variant game on a smaller map with an always-online component that still didn’t run the depth of simulation advertised. However, I hate it when “Worst Things Ever” are always within the last 2 years, it makes me feel like NME or something.

There was a news story in 2004 about a tree in Fair Oaks, Hampshire. A large and impressive tree, the vicar of the church it stood in had been trying to get rid of it for ages, but couldn’t get his parishioners to agree. One day, he just had it torn down. His excuse was simple, a paedophile might be hiding behind it.

Will you not think of the children?

The tree was a yew tree, as it happens. I don’t know if the recent and ongoing investigation was named after it, but I like to think it was. I can’t actually find anything now about the tree from an original source – the writeups online all go back to a Daily Mail article that doesn’t appear on their website – so it may be apocryphal, or lies. It doesn’t sound too unlikely, though, since all the people do actually exist.

As a geek, as a system administrator and occasional network person, I don’t believe in the censorship of the internet, or really of anything. I’m afraid that some elements of the government would like to take over the internet and make it “safe for children”, like a children’s playground with steel bars but rubber floors. I’m not a parent, which I’d imagine changes the perspective, but I feel that the price of a free internet is that occasionally the views and things on it are the things you don’t want. I’ve got no objection to people looking at any kind of porn – whatever gets your rocks off – it’s not until you act on those impulses with someone non-consenting or not able to give full-knowledge consent that you have strayed into verboten territory.  I’d prefer the industry was self-aware enough to comply with the various voluntary schemes to keep it out of easy each, as in general it is, but I don’t think that government regulation is worth the price to personal liberty. In the same way that I don’t think we need new laws on taxes as much as we need the existing laws to be actually enforced.

This goes to surveillance too, they trot out the rhetorical lines about how, if it catches a terrorist or potential terrorist, isn’t it worth having your every email, text and phone call stored? The problem is that they need to realise that no, it isn’t, and that our society is not (yet) in a place where the people doing the surveillance are without internal prejustice enough to be trusted with that amount of intrusion into our personal lives.

So yes, I’m afraid that the government is taking over our internet and making it rubbish. I’m afraid that, as a provider of free web hosting services to my friends, my legal obligation to monitor what my users do and say is going to spread over the horizon where it is no longer cost effective to do so.

But more, I’m afraid that there is no consequence for the government doing exactly what they like, because it’s for “The greater good” and there is no way to stop them save every five years, by which time they can fuck everything.

Rumour has it that you once had an alter ego who also participated in uborka, back in the day. Is it true, and if so, why?

I didn’t. And if I did it was a different alter-ego, who was really someone else, but actually if I had it wouldn’t be true anyway so the reason wouldn’t be there either.

These questions are for all readers:

Our next interview will be with Lisa, who can be found on twitter @turquoise and who blogs, very occasionally, at http://girasol.me.uk/. I’ve heard she’s also all over mumsnet, pinterest, etc. Have you got any questions for her?

4 thoughts on “Where are they now? An interview with Aquarion”