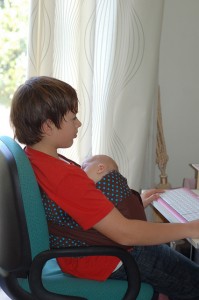 I have moved 4 times since then. We are hoping to not have to move again for a little while, I like it here.

Probably, I don’t think I have changed much beyond a few more wrinkles.

If I spend too much time staring at Pinterest, I hope the internet equivalent of punk is on its way to liven up the homogeneity of it all.

I also hope that publishers will wake up and reshape the way they do business and realise that making it as hard as possible if not impossible for people to purchase content legally.

The blog has not been updated in years. I use Twitter mostly with a sprinkling of Facebook to keep in touch with family and friends who moved abroad or who know me IRL.

I tried to like Google+ but failed. I was put off by the insistence on a real name when I intended to use it in place of Twitter.

I have been tempted to start a new blog for those times when 140 characters are not enough but I don’t think I have the discipline to make it more than a collection of rants.

Get my 5k running time down to 30 minutes. Not sure why, it just seems like a nice round number. No idea what I’ll aim for after that.

There’s a fair age gap between your two children. Have you brought them up very differently, and how much of the Toddler’s upbringing is delegated to the Teenager?

They have very different personalities so we have had to adapt. The general guiding principles are the same but we are still very much learning how to raise an individual who is flamboyant, wears all his feelings on the outside and whose feelings are all very intense.

We think he finds us quite boring as a family. He likes people, company delights him and he will often walk up to other children in the park and ask them if they want to play with him and will happily chat to their parents too. We often wonder if he is trying work out if they would be a more suitable family for him and if he is trying to get them to adopt him.

The Teen does help. He changes the occasional nappy, he can handle the bedtime routine. He provides entertainment and distraction. I call it acquiring valuable life skills and reinforcing the message of the value of contraception, he calls it slavery. Potato, potahto.

You cycle quite a lot. Are you a Lycra Lout, or the dream demographic – suburban mum on a bike? (Or a bit of both?)

I like walking, riding a bike is just faster walking for when time doesn’t allow to cover the distance.

I don’t wear cycling gear, the type of riding I do doesn’t warrant it and I’m too stingy to buy single use items. I am sure if I rode longer distance I’d probably invest in a chamois but for journeys of 10 miles or so tops it seems overkill.

There’s a toddler bike seat on my bike and I have a basket so I guess suburban mum on a bike is a better descriptor than lycra lout.

The realisation recently that while I enjoy the freedom of getting on the bike to go from A to B I am not willing to afford my teenage son the same freedom should he wish to cycle to school. I would like for him and in time his brother to be able to ride in safety should they wish to without having to put themselves through the unpleasantness that is vehicular cycling.

I may become militant as I age, for now I support the campaign for childhood freedom http://www.childhoodfreedom.com/.

If she’s up for it, I’d like to ask Rachel Clarke:

1 thought on “Where are they now? An interview with StroppyCow”