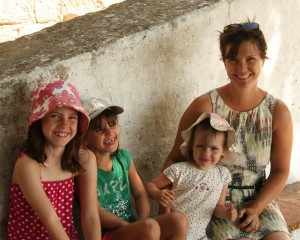 No. In 2004 we were in Tokyo: we returned to our house near Warrington at the end of that year. We had the Manchester ship canal at the end of our garden and it was very cool. In 2006 we moved to a village near Chester, then in 2011 we moved 4 doors along the same street. Am planning to stay put for a bit now, moving is rubbish. Village life, though…!

I’d hope you [Karen] would, it is only 6 months if that since we last met! I don’t suppose anybody else would because most people haven’t met me. Apart from some extra wrinkles and pounds (stones, bah), I don’t think I have changed much.

Turquoise was a lovely blog. Living in Tokyo was such an adventure I had loads of funny stories and interesting things to say all the time. When I came back it morphed into a mummy blog (sadly not one of the sponsored, lucrative ones) and really became very dull. Plus, because it had started as a way of keeping in touch with family and friends while we were away, I was always conscious that some of the people I might have liked to write about were reading the damn thing. So it fizzled. But I missed blogging so I went to girasol, with the idea of being a little more anonymous, but it has never really felt like home. Blogging ain’t what it was and I quite miss that but especially with the children getting older I am aware that even if I did write, they might not appreciate being written about – but they are such a huge part of my day to day life, how could I not mention them? I can’t see me going back to it unless we move abroad again.

I love Facebook. I know it is not the thing and one is supposed to decry it and love twitter, but twitter moves too fast for me. If you catch me on there, chances are I am very bored (probably left my book at home) or trying to get hold of you! Or complaining about customer service or bad parking – it is fantastic for getting people’s attention.

I also love mumsnet – that nest of vipers has made me laugh more than any other site.

Some days, Facebook and mumsnet provide all the adult conversation I get.

I have three months until a Significant birthday. Given that I have been running along the purported 9-week c25k for nearly 2 years now, wouldn’t 5k before 40 be nice? But don’t hold your breath. Winter is coming 🙂

I don’t know. In my happy liberal mind I would really like all the people putting nasty stuff in it to just stop but that isn’t very realistic. I do worry about the pornification of, well, everything, and the Internet is just a small part of that. I don’t want my girls growing up feeling that they are only valued for their looks, or that they have to be groomed and “sexy”, and I can get very exercised indeed about the pinking of girl stuff and the narrowing of their horizons – so much worse than in the 70s when we genuinely did think women could and should do anything. But that has little to do with the Internet. I suppose I think the government should back off (this applies to most areas of life: do not get me started on that Gove man and education) but I don’t think the opting-in to adult content as a default rather than having to opt out as we have at present is a bad idea. But at the same time it is our job, as parents, to teach our children to stay safe online as elsewhere.

What do you miss the most about living in Japan?

Oh blimey, where to start. There are days, usually in the spring or autumn, where I step out of my front door and there is a scent in the air, or a crispness or just a feeling, that takes me straight back. In some ways of course my nostalgia for Japan* overlaps with a general nostalgia for life before children (and happy memories of being utterly spoilt as an expat wife) so I think back fondly to wild nights in the karaoke bar and afternoons in the cinema and sitting under cherry trees. Mostly, though, I would have to say the food and the extraordinary kindness.

*favourite Japanese word: natsukashi. We don’t have a proper equivalent but it is a kind of happy nostalgia.

What do you miss the least?

The stupid address system that made it ludicrously hard to find anything. People who muttered in perfect English that they didn’t speak English, when you addressed them in (poor but surely not incomprehensible) Japanese. The sheer bloody frustration of trying to get some simple things done – I remember bursting into tears in the first month because I just wanted to watch some telly (this was the olden days, remember, no wifi) and a man had been out and he couldn’t make it work and I didn’t understand why! Earthquakes. Cockroaches.

What’s the most ambitious cake you’ve ever made, and what occasion was it for?

I don’t tend to do show stoppers. I am the anti-Francis with substance but little style. I did make a mahoosive red-velvet cake for a friend’s 40th – I’d never done cake to feed 35 people before and was relieved it turned out well. Oh, and I made a doll cake for one of Maggie’s birthdays that I was pleased with (fortunately small girls don’t notice wonky icing).

As a mother of daughters, how much pink sparkly stuff have you got in your house?

Less than you might think. Maggie is nearly 10!! and past that stage. Tamsin has never been that pink, though she likes a sparkle (she is very cool in silver jeans). Jenny is still very pink, at 3, but I have faith that this too will pass. Now ask me how many plastic bits of tat we own.

Our next interview will be with TrailDragon, who can be found on twitter @traildragon and who blogs, very occasionally, at http://traildragon.co.uk/. Have you got any questions for him?

4 thoughts on “Where are they now? An interview with Turquoise Lisa”