This recipe was a bit of an experiment. I had some stewing lamb in the fridge that needed eating but didn’t fancy regular lamb stew so wondered what shepherd’s pie made with stewing lamb rather than mince would taste like. It turned out rather tasty!

I used a pyrex dish to do the oven bit for no other reason than my metal casserole dish is big enough for stew to feed half the street.

Ingredients: All measurements are approximate. 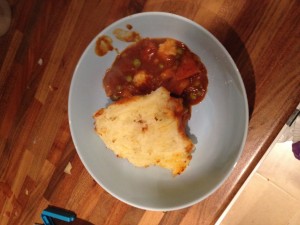 One very blurry photo of food – I probably should have put my glasses on to take the photo so I would know how blurry it was!