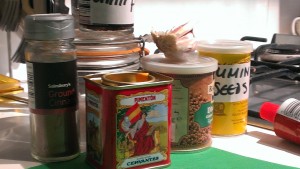 I’ve made this in the slow cooker and on the stove, and both results were fine. It follows that the better the quality of beef, the nicer the texture of chilli. Beyond that, it’s all pretty straightforward.

My general attitude to recipes is not to bother with all that mucking about. I make an exception here by sticking the oven on, cutting an onion in half, and roasting it along with the peppers while I was doing everything else. It’s good if you roast fresh chillis too, but I didn’t have any yesterday.

While the veg were roasting, I switched the slow cooker on to auto (I don’t know what the different settings do so I usually use auto), and put in the meat, spices (paprika, cumin, coriander, cinnamon and a small amount of flaked chilli, because I didn’t want it to be too hot for Bernard to eat); then I cut up and added the roast veg, a tin of kidney beans, and a carton of passata.

Next I stuck the lid on and went out to the winter carnival, where I was buffeted by the crowds, and Bernard wore me down until I gave him £3 for a hook-a-duck that didn’t even have any water in it, and he “won” what he refers to as “a musket.”

Return home, cook some rice, and eat the chilli until it is all gone. 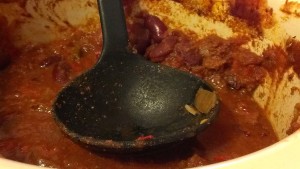