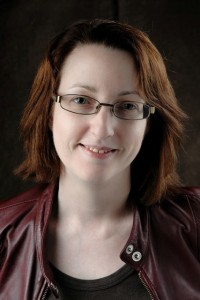 No. We moved a couple of years ago – a great distance of about 100 yards. They still made us hire a van though which was a bit weird. They had to put our stuff somewhere until we legally owned the house across the footpath. I love this house – it’s my forever house and I am NEVER moving again. Well, at least not until the kids leave home and I manage to persuade Rob (@akrabat) that we should live somewhere with a sea view.

Pewari’s Prattle is no more. I felt guilty not updating it and I loathed having to keep maintaining the WordPress site with updates and comment approvals when I didn’t even use it any more. I kept it alive for a long time on behalf of the infamous mooncup post which a lot of people used as a support thread, but there’s plenty of better resources out there now. It was time to let it go.

I’m on Facebook, which I don’t really like, but most of my friends are there so that’s where I end up spending my social media time. I lurk a lot on Reddit and occasionally still pop into Mumsnet. I’m on Flickr (http://www.flickr.com/photos/pewari/), am very active on the Coursera forums for the Science Fiction and Fantasy course I’m taking at the moment. I even occasionally remember Twitter (@Pewari). Oh, and I have an author page under my real name (http://georginaallen.net) which isn’t particularly exciting right now but it’s on my web-developer husband’s to do list (so he might get around to fixing that in the next five years or so!).

That’s next February – that doesn’t leave me a lot of time! I’d like to have sold another short story by then. I have three in circulation at the moment, but I can’t really control how long it takes for editors to read them and make a decision, so that’s really out of my hands. I’d like to be able to barbell squat 55kg (my body weight) – I think that’s just about achievable within the next three months.

I think their ideas about filtering are misguided and won’t work. Filters break things. We use them at home for our kids, but don’t rely on them, preferring to monitor and educate about internet safety and responsibility (aka Don’t Be A Dick On The Internet). The filters didn’t prevent my eldest getting upset when he found a youtube clip about a guinea pig and snake being “friends” (as he thought) with the predictable result of the guinea pig being eaten. It also prevented him looking up Warhammer pages for his hobby because the filter classes it as “weapons”. There aren’t filters if they use a smart device or go to a friend’s house. I am not a big fan of filters. Education, communication and experience is more important.

I also really dislike the idea of the government having control over exactly what is restricted. I think after the Edward Snowden revelations we can safely assume that they don’t have our best interests at heart when it comes to technology, internet and our privacy.

Are you more used to exercising in public now and do you now consider yourself as a lifter?

I still hate exercising in public, but the gym has all these COOL free weights, so I’m getting used to it! I draw the line at the gym’s group classes though; that way madness lies.

Am I allowed to consider myself a lifter after only 4 months? I think I do, but I’m still very much a newbie. I’ve learned very quickly that the way to stay interested in fitness is to find something you love repeatedly doing. For me, that’s picking heavy things up and putting them down – not just for the challenge (although that’s great) or because I’m making progress (although I am).

I like the high. There’s an adrenaline dump as I lift and an endorphin rush when I’m done. I’m not entirely sure it should be legal. I’ve gone from struggling to do a barbell squat with an empty bar (20kg – it took me three days before I could climb stairs comfortably after that first session!) to being able to squat 45kg. Not bad considering I was a weedy asthmatic kid at school who used to forge notes to get off PE.

My body is changing too. It wasn’t the goal, I only wanted to get stronger and prove to myself that I could do it, but wow… I have the beginnings of abs and definition in my arms and shoulders! That is very cool. I’ve tried a lot of different exercise programs and nothing has had such dramatic changes as this. I’m also not having to ask for help at work when there’s a 25kg box to lift. And on Sunday, a shop assistant asked if I needed help with a heavy item I’d bought and I was able to say “No thanks, I’ve got this”. Then I got out to the car and discovered the box didn’t fit in the boot of my Micra, but… baby steps 😉

For any fitness geeks who are interested, I’m following the Stronglifts program and my current lifts are:

For comparison, I weigh 55kg.

Did you play Mass Effect 3 and, if so, did you like it?

HAHA. Yes. Just a bit. I’ve been addicted to the Mass Effect series for years now and it’s still my go-to game. I won’t tell you how many times I’ve played through the entire series except to say that it’s well into the double digits now. Interestingly, I’m still finding content I haven’t seen before in the games – different choices, different character conversations. I love the storytelling and world building that’s gone into it.

Do you ever spend the afternoon lying on the sofa eating jaffa cakes?

Oh, I wish! I’m in an overcommitment cycle at the moment and coming down with a nasty cold, so that sounds really, really tempting.

How do you motivate yourself to achieve in so many spheres of life?

I have the sort of brain that gets bored if I’m not learning things. Plus, I’m addicted to badges. Want me to achieve something? Give me a badge for doing it. Or tell me that I’d NEVER be able to achieve that – I’m stubborn enough to try and prove you wrong.

More seriously, I have terrible self worth and anxiety which I fend off by constantly proving to myself that I’m worthy of existence. Another reason to enjoy lifting – it’s one of the few times when I can focus, feel calm and not hear the trash talk my brain throws at me constantly.

I’ve also learned that I work best if I build habits rather than aim for particular goals. If I do make a goal, I pick things that I can achieve by building habits, I make sure it’s actually possible and then I tell everyone about it so I have the embarrassment factor if I quit. It still bites that I was told I was a “quitter” when young so accountability is a powerful (but somewhat negative) motivator for me.

I do have a tendency to try and do too many things at once, collapse under the strain, strip everything out and begin again from scratch. I’m getting better at life balance as I get older, but I still have a lot to learn.

What tattoos have you got and what do they mean? 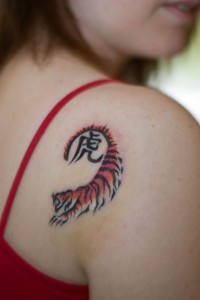 I have two tattoos. One out of love, the other out of need.

The first tattoo I had done was the tiger on my shoulder. I had it specially designed for me by an artist I loved, so as far as I know it is one of a kind. I have a lot of tigery coincidences in my life – I was born in the Chinese Year of the Tiger and Tiger Feet by Mud was number one in the UK charts that week. As a child, I used to have a painted tile of a tiger on my door which I still half-believe was my totem protector. When I finally decided on the tattoo design, the Year of the Tiger had come around again and I was active in a Chinese martial art. It seemed like a good “forever” motif. I adore my tiger tattoo. I don’t often see it – but when I catch a glimpse of it in the mirror, it always makes me smile. 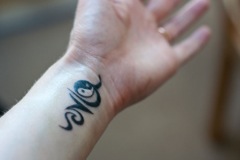 The second tattoo was a pattern I liked from a temporary tattoo, which seems rather silly. It reminded me of the sort of things I’d doodle on the corners of notebooks as a teenager. It’s a yin yan with embellishments and as you’ve probably realised from an earlier response, I struggle to get balance in my life. It’s on my wrist, visible as a reminder. When I first had it done, the artist persuaded me to have it larger than I wanted and for a while I hated it. But it’s part of me and who I am. I need to constantly see it on my wrist to remind me how important good life balance is and that when I feel mired in the bad stuff that it won’t take long for the good to come round again. I’ve grown to love it. No regrets now.

Thanks for the interview, Pewari! Next week we are interviewing good old Dr Pockless, whom you may remember from long rambling posts about moths, and made up literary analysis. Do you have any questions for him? Send them our way!

6 thoughts on “Where Are They Now? An interview with Pewari”