On Tuesday Pete and I had an excellent night out courtesy of Reading Skeptics In The Pub, at their very first In The Geek Midwinter festive show. After a day of crazy running around, leaving the Small Boy having tea with his Grandad before heading out to perform in his own Christmas Concert, I caught up with Pete on the train into Reading, and we went to Mission Burrito for tasty filling food and an utterly soulless attempt at flirting on the part of the spotty countermonkey who claimed to remember me from the last time I was in there, which was possibly before he left school. 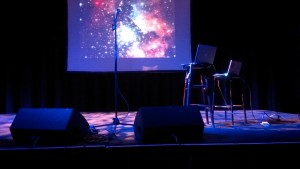 We headed over to the theatre and chose second row seats, not wishing to come to the attention of anyone who might be on the stage and looking to pick a fight. The bar was open and the wine was vile, but still lent a festive fuzziness to the evening. Uborka’s very own Ms Gammidgy was busy plugging in laptops and making everything ready. 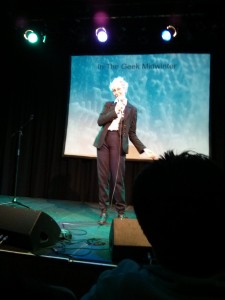 The evening was compered by comedian Iszi Lawrence, who overlooked the front row and went straight for the second row cowards, accusing me and Pete of not having been together for long. She was hunting for the odd few people in the crowd who were not computer programmers, and missed a few easy jokes by not asking me what I do. Her star turn before each act involved christmas carols with spectacularly geeky lyrics, which Pete pretended to hate, but sang at the top of his voice. 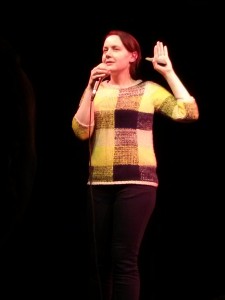 Iszi introduced stamp collector Helen Keen, who had a super jumper and a few moments of added tension when her powerpoint wouldn’t play. When it was working, she showed pictures of scientists with hairy chests and demonstrated the SPOOKY connection between NAzis and SAtanism, if you get my drift. 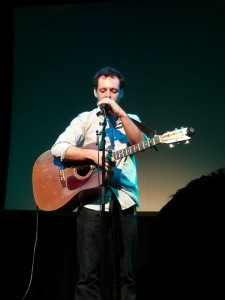 A beer break and more carols were followed by the absolute star of the show. I mean, they were all awesome but physics teacher and geekpop musician Jonny Berliner was the awesomest. His set included a christmas power ballad about Michael Faraday, a calypso about DNA, and a really quite moving ode to Alfred Russell Wallace. Catch him if you can, his stuff is hilarious.

Finally we were treated to a short lecture on frogs and piss by Simon Watt, who proved that you don’t even have to be making jokes about it for genetics to be funny, and that Viggo Mortensen is hotter than Orlando Bloom, like we needed science to answer that. 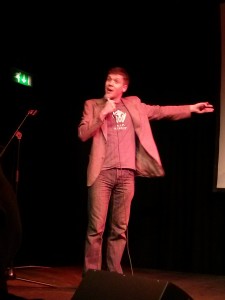 This was a good night out. Impossibly good value for a tenner, and I really hope Reading Skeptics will organise another one (I’ll help!). Perfect length, quality acts, and lots of opportunity to get a bit pissed and talk to my mates.

7 thoughts on “In The Geek Midwinter”