After listening to this album for a few weeks, I am disappointed that my review post is going to be so crap, but sadly as far as fodder for The Bowie Project is concerned, this album is nutritionally dearthsome.

It’s been fairly common so far for Bowie to include a cover version on each album, and I’ve generally glossed over them, so it shouldn’t really be surprising that I’m glossing over an entire album full of them. 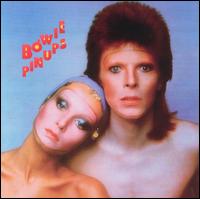 It doesn’t help that I don’t know most of these songs already. I know I Can’t Explain and Anyway, Anyhow, Anywhere by The Who, of course, and I was previously familiar with Bowie’s version of Sorrow, but that’s about it.

I tried to figure out what criteria to analyse this album on. Not much point in talking at great length about the songwriting, because Bowie didn’t write them. If I were more familiar with the originals, I could talk about how he’s interpreted and modified them, but a cursory furtle on YouTube suggests that he’s generally stayed fairly close to the originals. Quality of performance and production: perfectly adequate. That said, you might be curious to know which bands he chose to cover, to which the answer is: The Pretty Things (x2), Them, The Yardbirds (x2), Pink Floyd, The Mojos, The Who (x2), The Easybeats, The Merseys and The Kinks.

I get the impression that this album, while touted as a homage to bands that David Bowie considered influences, was possibly actually just a way of rattling out more quick material while Bowie’s popularity was riding a crest, and demand was high, but he didn’t have any original material available to record. It reached the top of the UK album charts, so clearly it was what the world wanted at the time, but in the context of my mission it’s a bit of a flow-breaker. I’m quite happy to move on.

Hits from this album: Sorrow was released as a single, so I guess this is the only one that you could say Bowie had a hit with.

My favourite song from this album: I’m going to choose Where Have All The Good Times Gone. You can choose whether to enjoy the original version by The Kinks or Bowie’s cover.

Next up: Diamond Dogs