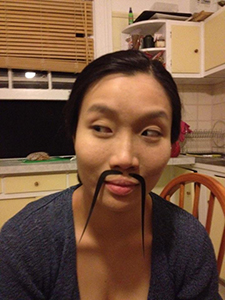 This question actually prompted me to make a list of all the places I’ve lived in since ’04, and it turns out in the last 9 years I’ve moved house 11 times. Just realising that makes me feel tired..!

I haven’t blogged regularly since I was in New York, sadly. I keep meaning to start again but I find it is so much easier to to perform a fractured set of identities on various social media platforms than it is to sit and compose the kind of long-form writing that I feel is expected of blogs today. All the random bits of things that I used to throw onto a blog now go on Twitter, or Facebook.

I’mma make me some robot chocolates!

I’ve wanted to do this for a while now, being both a fan of robots and a chocolate fiend. I even bought a mould (like this one) ages ago but never got round to using it.

Six months ago I quit sugar, and it wasn’t until very recently that I learned that you can make tasty chocolates with dextrose instead of sucrose (the Internet says so, and why would it lie?) so I’m going to give that a go in the new year.

Actually, as Destructor mentioned, where the current Australian government and the internet are concerned, the biggest problem is getting the internet to work good. But given Abbott’s trail of destruction through issues like our environment, marriage equality and our treatment of refugees, Internet speed is the least of our concerns at the moment. (Sorry, sorry; I know this isn’t Facebook. I’ll get off my bloody soapbox now.)

What bands from 10 years ago are still around (putting out albums and such) and you still like and respect and yeah.

This question makes me feel old. What are the kids even listening to these days? Next question!

Let’s see. A few of my favourite artists from 10 years ago have made music relatively recently that I love. Radiohead’s output has stood the test of time (although TKOL was over 2 years ago and I must admit I listen to the remix album more than I do the original). I still adore Cinematic Orchestra; they’ve made more curatorial than studio albums recently but they are still excellent.

Ooh I know! Amon Tobin! After all these years he is still a god amongst men. The album he released as Two Fingers is delicious and I highly recommend it. His bass sounds have gotten all crunchy and dirty in recent years; I love it. I also saw him perform ISAM last year (at the Sydney Opera House Concert Hall) and it was just…tremendous.

What has changed about your media consumption (reading, films, tv, podcast, internets, anything) in the last ten years?

In a nutshell: I am consuming far more than I ever used to, and yet constantly feel like I’m being left behind.

What do you care about now that you would have swore up and down you’d never care about ten years ago? 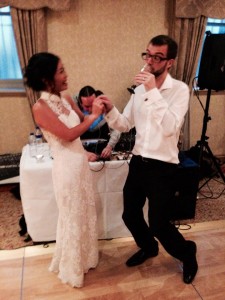 Marriage. It’s not something I grew up wanting, or assuming I would do one day. Even after I found myself in a relationship with someone I knew I wanted to build a life and grow old with (which was in itself surprising and delightful enough!) getting married was not a thing we really felt a need to do. Certainly we would have preferred not to marry until we had marriage equality in Australia, not least of all because of that awful monitum from the 2004 Marriage Act that specifies marriage in Australia as “the union of a man and a woman to the exclusion of all others”. All celebrants are legally obliged to say this at every wedding they perform; I’ve been to a few weddings in Australia since ’04 and every time I hear it I throw up a little in my mouth. At our wedding we dealt with it by shaking our fists and boo-ing when the celebrant had to quote it during the ceremony. (She didn’t mind. Also, if you can’t heckle bad laws at your own wedding, when can you?)

I changed my mind about getting married after my dad had a health scare last year. My relationship with my parents has always been an uneven one. I love them and I know they love me, but we are so very different and that hasn’t made for the easiest parent-child relationship over the years. Getting married was one thing I could do that they would understand and would bring them joy.

Looking back, I’m very glad we decided to get hitched sooner rather than later, because 3 weeks before the wedding, Dad got pneumonia. Up to 2 days before the wedding we were uncertain about whether he would be able to attend. In the end the hospital granted him day leave but when he got to the venue, he felt he wasn’t well enough to stay for the wedding ceremony or the reception. He did manage the traditional Chinese tea ceremony though, and in some ways that was the most symbolically important part of the day for him. James and I offered tea to him and Mum, and they welcomed James into the family as a son. And he got to witness me offer tea to my in-laws, and become a part of their family.

Our whole wedding day was just joyful, from start to finish. We spent the day ensconced in the loving company of our nearest and dearest – 35 of our closest friends and family, many of whom had traversed great distances to be there. I came to understand (in the way that experience brings understanding) how powerful and transformative these life cycle rituals really are.

Getting married is an act that is performative and affective; I am convinced of its significance in way that I never imagined I would be even 5 years ago. I’m not saying getting married is something everyone should do, but it should certainly be more than it currently is: an enactment of heteronormative privilege. It should be a choice made available to all consenting adults regardless of the gender of the person they love, and an inalienable human right in a civil and just society.

2 thoughts on “Where Are They Now? An interview with Stee”