Posted by Donkey on behalf of KTD

As a boy, I used to love Christmas. Particularly Christmas Eve. That was when the telly was best: Laurel and Hardy trying to get a piano up some steep steps, endless Disney cartoons. I’d lie on my stomach, glued to the googlebox all day long. Christmas Eve was also my grandparents’ wedding anniversary. It was always very jolly.

Every year, I had to slap the turkey before it went in the oven. (Which I still do.)

I even liked Christmas as a teenager. Again, Christmas Eve. This time, falling down the hill from the village pub after too many vodka and limes (I’ve always been classy), to eat freshly slapped turkey sandwiches on white sliced bread before going to bed.

I may have enjoyed Christmas as a student – but how can I be expected to know that?

It all started to go wrong when I had an office in the centre of town. I liked being in the city in those days. It felt urban, sophisticated, cool, my space. (This was Nottingham, for fuck’s sake. I’ve always been classy.) As Christmas approached, the town would fill up with grockles, frantically searching for shit to wrap up in bits of nasty paper. I had to queue in M&S to buy my lunch. The rot began to set in.

I began to hate all the frenetic activity of people around me acting like Armageddon was imminent. Social hysteria. I have the same reaction at concerts, too. I started to withdraw from it all, fingers in ears, lah lah lah.

Then, one Christmas Eve, my Grandmother had a massive heart attack; it was also her wedding anniversary. I watched her slowly drown, due to Adult Respiratory Distress Syndrome: a condition I had studied as part of my PhD. She died on Christmas Day.

That year, friends had to cook Christmas dinner. They were not used to cooking on an Aga, and so they let all the heat out, as I got pissed on whatever I could drink. (I had, however, progressed from vodka and lime.) The turkey was almost raw, and no amount of slapping would warm it up; a bit like my Grandmother, really.

Since then, I have backed further away from Christmas, and I think I now have it just about right. It starts on Christmas Eve, with Carols from King’s, as I make mince pies. It ends on Boxing Day, when I get the wonderful feeling that next Christmas is as far away as it’s possible to be.

I love January. Everyone is miserable, and nobody goes out, because they’ve spent all their money on bits of shit wrapped up in nasty paper. I feel free, unencumbered by social pressure. The world has just fucked itself, and that’s how I like it.

This year – because it will be our last in the cottage, and because we have Mike’s mother and sister staying for the first time, and since I am in a better place than I have been for many years – we have decided to put up decorations, and even buy a tree. (I am sure I will enjoy watching it wither and die over the twelve days.)

For several years, we have had no decorations at all. Although a couple of years ago, we arrived at the cottage to find that my mother had hung a solitary bauble in front of the fireplace: 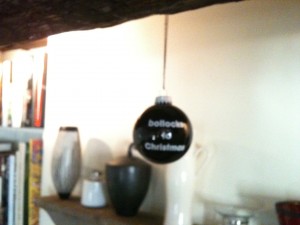 I love my mum.

Merry fucking Christmas to you all.

Now, fuck off and leave me in peace.