Oh gawd, get a load of this album cover. 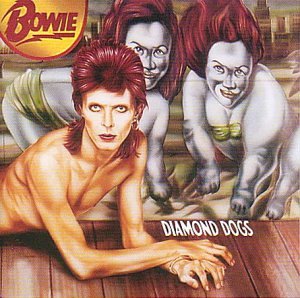 The material on this album is heavily influenced by George Orwell’s dystopic novel 1984, which you may have heard of. It’s very trendy to observe how 1984 has apparently come true, and this recent thread on the Android subreddit is a fine example of why such thoughts may have some justification. When I was reviewing “Ziggy” I was also reading a book about the moon landings at the same time, which I felt helped me to appreciate the mood, so I’ve done the same thing for this album and re-read the novel in question.

While the album is listed as having 11 tracks, the effect is of fewer. The first and last aren’t really songs in themselves, but really just concepts that serve as the prologue and epilogue. Sweet Thing, Candidate and Sweet Thing (reprise) serve as one long nine minute song, rather than three standalone items. In my mind, there’s really just 3 songs on side one and 4 on side two.

Once we’re past the spooky, disorientating introduction that is Future Legend, Diamond Dogs and Rebel Rebel are both songs that have gone down in my estimation greatly. I’m starting to get irritated by Bowie’s Rolling Stones impersonations – when Bowie’s songs from 1973-1974 sound like Rolling Stones songs from 1968-1972 then it’s pretty obvious who is aping who.

The other song on side one is the aforementioned Sweet Thing/Candidate bunch. This I am far more interested by, as it seems to be the harbinger of Bowie’s next phase, which I shall call Croony Bowie. You remind me of the babe. No ballads here though, this is not uplifting stuff. Unlike in Ziggy, Bowie hasn’t created a narrative around 1984, but rather he has taken that bleak atmosphere and used it to build little vignettes, snapshots of all the various people who exist in that bleak hopeless world.

Kicks off with Rock n Roll With Me which is like an intermission, a little ray of sunshine amidst all of the bleakness. Not exactly an advert break, but definitely not an indigenous specimen in this album. And then back to your regularly scheduled programming…

I really rate We Are The Dead – it doesn’t have verses and choruses, but rather alternating sections. The first section has a beautiful tenderness and I love how authentic Bowie’s singing is throughout. The second section perhaps is a little plain, the words are spat rather than sung, but that’s the point, the contrast between the two different sections is key to the overall effect of the song. The phrase itself refers to the state where you’ve abandoned the hope of saving society during your own lifetime, and now the only thing that keeps you fighting is the hope that future generations will remember you as a martyr who died fighting for what is right.

Then suddenly it’s 1984 and where the fuck did this song come from? I guess one day you wake up and think “I’ve never written a disco soul song, I could probably do that.” and so you do it, just so you can say that you have. Hey, it’s okay, I’ve been there too. However, Karen has managed to spoil this for me by letting me know that Tina Turner did a cover version, and so now I can’t listen to the song without thinking of her. You know how Austin Powers uses thoughts of “Margaret Thatcher naked on a cold day” when he needs to fight the fembots’ feminine wiles? Well, Tina Turner has a similar effect for me. 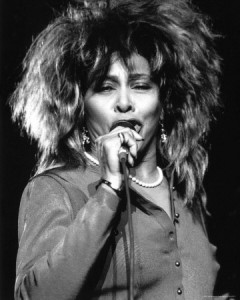 Of course, no album inspired by 1984 would be complete without Winston’s eventual submission, the declaration of love for Big Brother. Smashing song this, it’s got one of those choruses that is so elegant and succulent that you feel like you’ve heard it before somewhere, whilst meanwhile your heart is breaking and your skin is crawling at the lines “Someone to rule, someone like you, we want you Big Brother” because of all the baggage that that sentiment carries.

And then there’s the slightly weird epilogue Chant of the Ever Circling Skeletal Family which is eerily reminiscent of of Montreal, both in the nature of the song and the title. It does make me wonder if it’s possible for one 2-minute song to serve as the inspiration for an entire musician’s career.

Hits from this album: Diamond Dogs and Rebel Rebel.

My favourite song from this album: I dunno, I’m so haunted by the entire album, there’s no song on here that I’ve really found myself looking forward to. I’m going to chicken out and call it a three way tie between Sweet Thing, We Are The Dead and Big Brother.

Next up: Young Americans