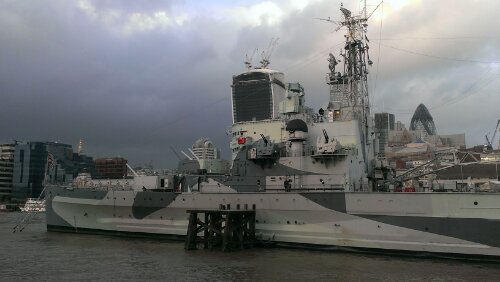 In the centre, those tiny waving figures are Pete and Bernard. It’s the last few dats of the school holidays, and fed up of being stuck in the house chowing at each other, we took the train into London. I thought Bernard would be interested in the mummies at the British Museum, but they terrified him into a massive sulk. We escaped to the river and found ourselves walking towards Tower Bridge on the south side. He burst into animation at the sight of this hulking great warship, which he assures me is “the strongest ship in the world.”

I’m worn out and it’s pretty expensive for something I have absolutely no interest in, however gratifying it is to see him get so enthusiastic. There is a cafe, though, so I sit with my book while the boys tour the ship. Looks like it might rain soon, doesn’t it?

2 thoughts on “Where Are You Now: Karen, January”