Clan Uborka took up camping when Bernard was quite small, and have got it down to a fine art by now, assisted by many occasions where we have had to cope with copious rain and yet more copious rain. We have just levelled up by spending an entire weekend camping in glorious sunshine, and now feel that we can at last share some of the things we have learned. So this weeks’ series will include Campsites I Have Known, Food I Have Cooked, Tips & Tricks, and What To Bring In Your Kitchen Box. There is also a competition for the best camping tip, the prize for which is a signed copy of The Camper Van Cookbook. Don’t get excited, it’s only signed by me, not by the author.

To kick us off with Campsites I Have Known, here are a few highlights from the last five years: 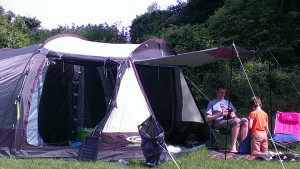 Britchcombe Farm was our destination for three nights this weekend. It probably wouldn’t make a highlights list if it wasn’t the most recent one we had visited. It is beautifully located in the Vale of the White Horse, and our weekend included a walk up to said white horse, our first two geocaches, and some truly excellent food at the nearby Barrington Arms. On the downside, a campsite with five huge fields really needs to consider having more than four showers. The portaloos were predictably unpleasant, and the wide open fields are very attractive to large family groups, who tended to be noisy late into the night. This is a perennial problem in certain types of campsite. Campfires are allowed, but they operate a wood cartel. 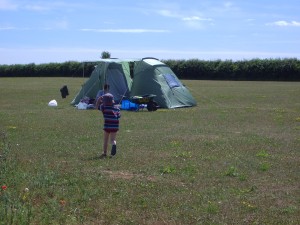 Abbey Home Farm is a very different proposition. A field, an ancient oak wood, compost toilets and hand-operated showers. Not one you would want to spend a week in, but so peaceful and pleasant for a couple of nights. There are a couple of hidden yurts somewhere in the woods so you could posh it up there again, though the toilets are something of an experience. We have been back here a couple of times and would certainly return again.

Shell Island is a massive sand dune in North Wales, with all the facilities of a holiday camp, but also the potential to camp in your own private dune with no sound but the sea. Nearby attractions include Harlech Castle and the rest of the Welsh coast, but you could just spend the whole time on the beach, and chill by your campfire in the evening.

Barn Farm in the Peak District is another enormous site with sloping fields but plenty of facilities. We have been here twice; the first time [coincidentally] on one of the Pagan feasts, so we were treated to drumming long into the night (it was okay, quite restful!). This campsite has what we consider to be the holy grail of facilities: a tea van, open at the crack of dawn. Parents of early risers will understand why we appreciate this so much. At our last visit they also had wood-fired pizzas. Less attractive now that Mike & K don’t live in the next village any more. 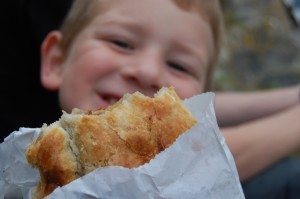 And finally, I’m including Arthur’s Field for Pete, because he does love a nice clean campsite with good showers, and this is the epitome. In fact it has two family wetrooms, where all three of us could share the shower, which is a huge bonus when it comes to tricking your child into being cleaned. It is situated right on the Cornish coast, with a short clifftop walk to the pasty shop and pub in the village. Most of my preferred campsites are on the wilder side, but Arthur’s Field is one of those with rows and columns, and you stay in your place, and you don’t put up any extraneous nonsense like beach tents or gazebos. But the rules control the fun, right?