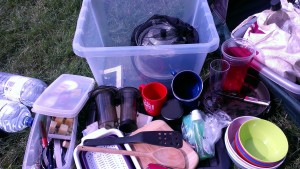 This is my kitchen box and its contents.

In the box itself, you can see the saucepan set: three aluminium pans, a shallow pan which is useless as a frying pan because food sticks to it and it’s really hard to clean, a small kettle, and a handle that can be used for any of the pans. We never use all these pans, I really shouldn’t take them all with us every time. Also fitting snugly in the bag with the pans are two enamel plates and four plastic plates.

On the left: two 2-litre water bottles. So much more manageable than a big water container, requiring more frequent but more pleasant trips to the tap. We often keep one chilled and leave one lying in the sun to warm up the water for face-washing.

Next to the water, the cutlery box, which holds one set each plus a tiny grater and a tiny whisk, both perfectly serviceable; a couple of plastic bag clips, a wine bottle stopper (we never use this), a lighter and some long matches. The lid was originally designed to hold a cool block, but I use it for watertight storage of sugar and sauce sachets. Whenever I acquire silica gel sachets, I add these too.

Next, you can see the aeropress coffee maker, which we discovered this weekend that we don’t need, because in fact you can make coffee in a mug, and ‘filter’ it by pouring it slowly into another mug.

Next to the aeropress: Bernard’s plastic mug (commemorating the golden jubilee), a set of stainless steel whisky tumblers belonging to my grandfather, and our two enamel mugs. Then the so-called non-stick frying pan and a random collection of plastic glasses.

Below the aeropress: a collapsing colander, a small but big-enough bamboo chopping board, a spatula and a wooden spoon that I think belongs to the Gammidgys, and my swiss army knife, mainly used for sharpening sticks in order to toast marshmallows.

The plastic bag beside them contains a small bottle of washing up liquid, a scouring sponge, and a plastic shark. You don’t need the shark, but if you pack and repack your kit over the years, you will find yourself acquiring such objects. And then bottom right: more bowls than we really need. You can also see the washing up basin in the picture: that’s really useful for carrying your dishes to and from the washing up point, or of course washing up in the field if there isn’t a point.

Not shown: a one-ring gas cooker. One ring is plenty.

All of this except the cooker and basin fits nicely into the box, if you know how to slot them in optimally. Writing this post I realise how much stuff we take that we don’t really need, so there will be space in the box on the next trip.

Don’t forget I’m giving away a copy of the Camper Van Cookbook for the best (or only) tip left in the comments boxes before 14th August. “Stay in a hotel” will not win a prize.

3 thoughts on “The Uborka! Guide to Camping: The Kitchen Box”