It’s Sunday, and as often happens, our dinner plans have changed because we had lunch in a pub. That makes our lifestyle sound more decadent than it really is. Oh well.

Bernard had ravioli on toast for tea, followed by a long bath. We had walked 5.5 miles through muddy woodlands and his legs were tired. After he was in bed, I rummaged and came up with:

1 aubergine (which I proceeded to cut into large dice)
1 shallot (thin slices)
Half a bulb of garlic, of which I sliced up one large clove
A jar of zaatar of which I used two teaspoons
Half a jar of pesto about to go past its best
An ancient jar of sun-dried tomatoes, amazingly not mouldy
A few olives that I can probably spare from any potential future martinis that Pete might make me.
A tub of creme fraiche, which I did not use.

Using the oil from the SDTs, I basically flung all this lot in a pan, cooked some rice, and served it as it was. I was in two minds about whether to add half a carton of passata (there is always passata); Pete tasted it and said no, but on balance, I would probably add it next time. 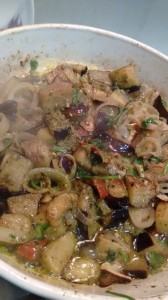