I’d been warned. But we have to do this. 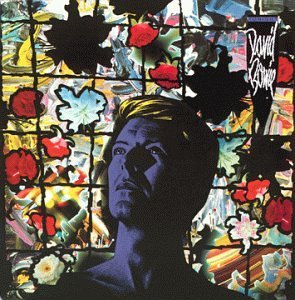 Not a terrible start to this album, Loving The Alien is a bit of a cheesy 80s pop song with ballady tendencies, but I can endure it. In fact, I’d even go as far as to say that I quite like it. Some fairly tasty bass work too, including a squelchy bass riff and some pleasant harmonics here and there. Miraculously, despite the fact that this song is over 7 minutes long, it doesn’t feel it.

Things start going downhill with Don’t Look Down. Bowie takes an Iggy Pop song and makes it reggae and it’s quite quite abhorrent. I’m not a big fan of reggae at the best of times, but hearing Bowie applying a Caribbean inflection to his singing just makes me cringe.

Did I say something about cringing? The third song is a cover version of God Only Knows by The Beach Boys, and this is even worse. I wouldn’t say that I’m desperately keen on the original, but it does have a certain delicacy, a tenderness that hints of an old couple sitting on their porch. Bowie’s cover does away with that, and replaces it with preposterous bombast and drama. I’ve listened to this song once and skipped it every single time since then. It’s poison.

The title track is another silly reggae song. This song was co-written by Iggy Pop and Bowie for Lust For Life, and was not a reggae song. So obviously, making it into a reggae song, and having Tina Turner (and you know how I feel about Tina Turner, dear reader) sing backing vocals was the logical next step. This song reminds me of Where’s My Plectrum? from the first Shiny Tight Stuff album. I’d been listening to a lot of Finley Quaye and decided that it would be a good idea to write a song in his style, complete with accent. In hindsight, it comes across as a little bit racist.

Immediately followed by another song from Lust For Life, Neighbourhood Threat. Seriously, it’s like Bowie isn’t even trying to make it look like he’s making an effort. This is probably one of the better songs on the album, though there are moments where it feels like it wants to be on the Top Gun OST. He’s too close for missiles, I’m switching to guns.

I’ve always found Blue Jean to be a fairly dull and unengaging song, it just plods along a bit. This, and Loving The Alien, are the only two songs on the entire album that aren’t either a complete cover version, or a collaboration with Iggy Pop. I’m starting to doubt whether Bowie really deserves to have his name on this album.

Let’s move swiftly on to Tumble and Twirl which instantly slaps you about the face with its Mark King esque bass line. Never been a big fan of Mark King’s sound, it reminds me of a two-stroke engine. I can’t help but find this song a bit ridiculous. It’s another song where I’m not sad when it’s over.

I Keep Forgetting is also ridiculous, it’s a cover of a blues song from the early 60s is speckled with little drum breaks that seem to be a little bit ungainly, I’m not sure whether the timing is off or not, but there’s something disorientating about them. Not a very fluid listening experience.

Thank god, we’ve reached the last song, it’s Dancing With The Big Boys. It’s hard to describe, it’s just this big theatrical production with bellowed lyrics and horn stabs and a very abrupt ending. As Bowie rightly points out, “this can be embarrassing”. I’d say he’s unintentionally hit the nail on the head.

Hits from this album: Blue Jean and Loving The Alien both did fairly well in the singles chart. Tonight was released as a single, and was successful in some European countries but not in the UK.

My favourite song from this album: Loving The Alien wins by default.

Next up: Never Let Me Down (unless you think I should do the Labyrinth Soundtrack).