Hi! Remember me! What do you mean, no? 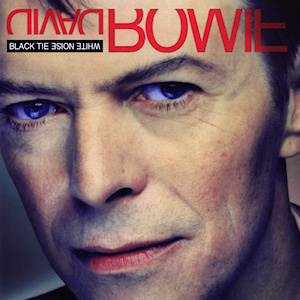 The album gets off to a majestic start with The Wedding with its throbbing bass, ethereal synth and distant church bells. This album was greatly inspired by Bowie’s own marriage and it really does give us the genesis of a reborn, more mature David. This song, and its non-instrumental counterpart at the end of the album, come to nearly 10 minutes in total, which is pretty much 1/6 of the entire album. Which explains why I now feel like I know it like a long-lost friend.

You’ve Been Around has a sort of industrial, somewhat NIN-y feel. It’s intense and sounds like it would really hurt you if it fell on you. Really like the vocal processing too, it’s the kind of thing that could so easily sound cheesy, but it works here. The guitars are enormous, the bass line is meandering and dominating, and I look forward to the chorus coming around every single time. I’m still in two minds about the saxophone though, I know that it’s Bowie’s pet instrument, but sometimes it just seems inappropriate.

Next up is a cover version of I Feel Free by Cream. Now, first time I heard it, I was turned right off, and I thought that it was going to join his cover of God Only Knows in the realms of songs that I skip every time. But then I discovered that Bowie actually had strong personal reasons for recording it ((his step-brother Terry committed suicide in the 80s after being hospitalised for schizophrenia, and Bowie recalls them having to walk out of a Cream gig during this song as it was just so overwhelming)) which means that now when I listen to it I’m not hearing the song, I’m just hearing the reasons, and I can’t tear myself away.

The title track comes along next, it’s a sort of bubbly funky endeavour that I’ve never really gotten along with. But that’s my prerogative. Let’s move on to another good one.

Jump They Say is a slightly autobiographical song for Bowie’s step-brother and it’s another of my favourites. I like how the verse just vamps around in the same place for a while, so when the chorus brings some chord changes, it’s really melodically satisfying. Bowie also gets up to his old trick of starting with a very understated vocal delivery and then pulling out the big guns later on for maximum effect.

I’ve only just discovered that Nite Flights is actually a Scott Walker cover. I was actually struggling to decide whether I liked the Bowie version or not (some aspects I like, some I don’t) but now that I’ve heard both, I’ve decided that I hate them both and can move on. Hooray!

Pallas Athena is bollocks, in my opinion. It’s a fairly dull generic dance song with more bloody saxophone and some sparse lyrics that have been clearly added for the purposes of sounding a bit haunting, and nothing else. It’s definitely skippable, if you’re in a hurry.

Miracle Goodnight is a funny one, it sounds a bit like a theme tune from a kid’s TV show. I enjoy it, I’m not sure exactly why, it just bounces along jollily, and I suppose it’s also a song about love that isn’t a love song, which is a rare thing indeed. That Nile Rodgers guitar solo is genius, it has to be said.

Surely Don’t Let Me Down & Down has to be tongue-in-cheek? It cracks out all the soul ballad cliches without exception. That said, Bowie had just got married, so maybe he really was this soft in the head. Still, cheap as it is, when he puts his voice into top gear for the last verse, it’s hard not to feel at least a little bit affected. And it’s actually a cover anyway.

And then we have another instrumental, Looking For Lester. This one’s funkier but suffers from the old problem of taking a few ideas and stretching it out for five and a half minutes, so again it’s a question of context. It’s a song for the clubs, not the musical trainspotter.

And I’ve made another last-second discovery, which is that I Know It’s Gonna Happen Someday is a Morrissey cover! And the same thing that always happens has happened, which is that I end up going off and listening to the original and getting confused. Oh dear. Anyway, the cover seems a bit more gospelly, quite a bit tidier, but just a little bit overly theatrical, maybe.

And the album is closed off with The Wedding Song which is basically the opening song but with vocals. I suppose that I’ve become a little bit overexposed to it over recent weeks, seeing as it makes up such a large proportion of the album’s running time, but it’ll recover.

Hits from this album: Jump They Say, Black Tie White Noise and Miracle Goodnight all got released as singles, though only the first one “bothered” the top ten.

My favourite song from this album: You’ve Been Around