If you listened to Uborkast last year then you may remember me mentioning my intention to try out some gig photography. Well, it took me a little while, but I finally got round to it!

On Saturday night I took my trusty Nikon D40 and my 50mm f/1.8 out to a gig to find out how it would perform in these conditions. I’d done a little bit of reading about the sort of problems that I could expect to encounter, and it all turned out to be fairly accurate.

With the ISO cranked and the aperture wide open, I was able to get nice clear shots at a fast enough shutter speed (1/250s at f/1.8 and ISO 800). The end result is fairly grainy, as a result of having the ISO almost all the way up, but it’s an acceptable showing from what is now a 10 year old camera. This is one of those aspects where the camera body comes into play – a brand new top of the line camera will produce less noise at ISO 3200 than my 10 year old entry-level DSLR does at ISO 800. Still, the pictures produced are a little, shall we say, “moody”, so maybe ISO 1600 would have been a better choice. 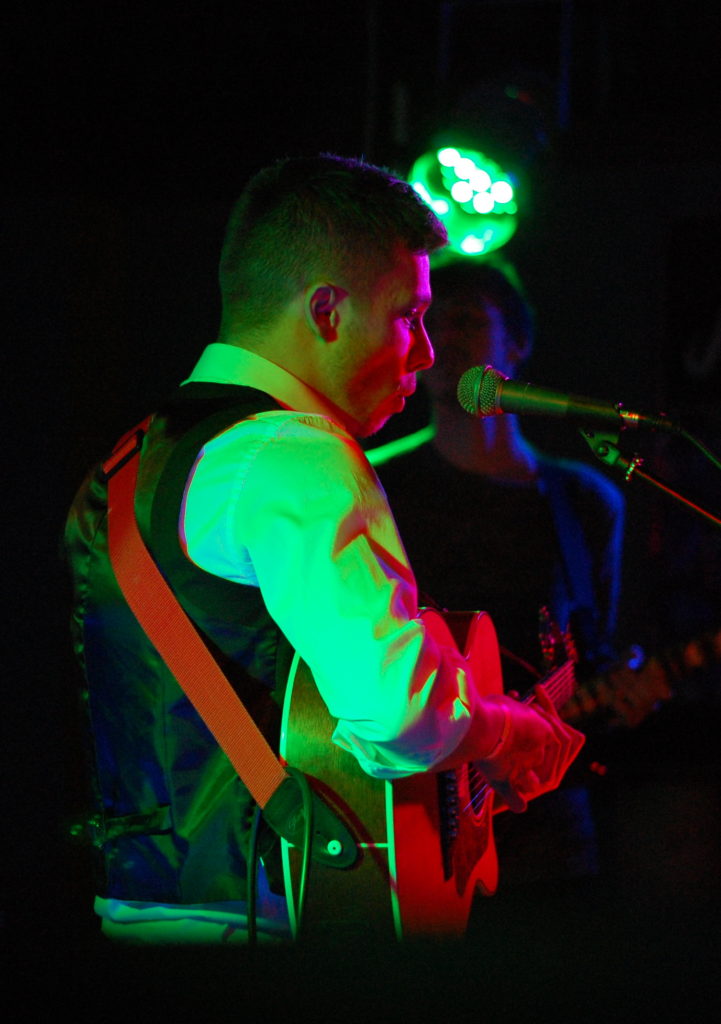 I mostly stuck to using the auto-focus. I’d read various articles about how to prepare for concert photography, both in terms of technical settings and also in terms of the more practical things to remember, and one author mentioned that one of his major annoyances was microphone stands. I’m really starting to appreciate that now. A lot of otherwise good shots were ruined by microphone stands, either because they wrecked the composition, or because the camera decided to focus on them. With basically no depth-of-field to play with, if the microphone stand is in focus then the person standing behind it isn’t. I found that the most satisfying subjects to photograph were the singers who weren’t also playing an instrument (and hence could hold their microphone in their hand throughout), and the musicians who didn’t sing at all (and hence had no microphone stand in front of them). For the others, I found that best results came when I moved around the side of the stage, and shot them in profile. 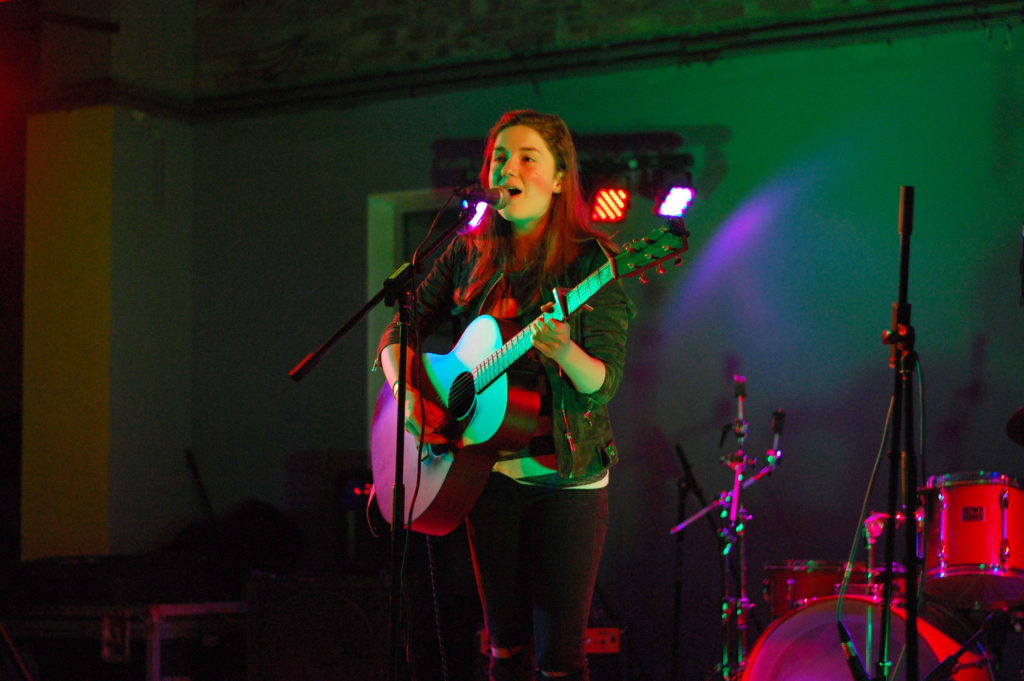 As a general rule, I use a zoom lens with this camera, and have only used a prime lens on a few occasions. That said, I’m a bit of a moron when it comes to using zoom, as I have a tendency to default to the widest angle possible to maximise light. I also do treat my camera phone as if it were a prime lens, because I assume that digital zoom is no better than cropping the picture after it’s already taken. Anyway, I’m digressing all the way into the weeds here, so should probably get back on track. Once you’ve chosen a place to stand, it narrows down your compositional options significantly. You can’t do much playing about with depth of field, because you need every photon that you can get, so basically all you can do is choose a direction and go for it. With only a 6 megapixel sensor, I know that I’m not going to be doing an awful lot of cropping afterwards, so I take the attitude that if I can’t get it right, the best I can do is to get it gloriously wrong. It’s somewhat liberating. 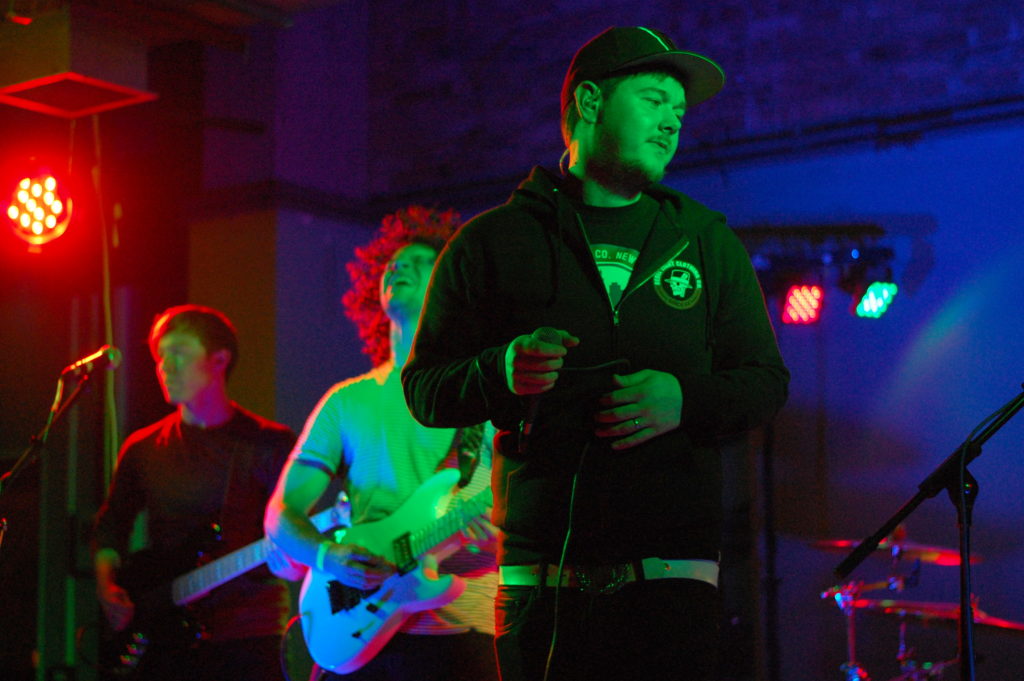 Getting In The Way

I wasn’t the only person taking photos at this gig, and as I was watching the other photographers I was realising how difficult it is to be unobtrusive when taking photos. I tried to minimise the amount of time that I spent taking photos, and I only got the camera out for a couple of songs from each band’s set. I also had a moment (thankfully very early on) when I realised that I’d been moving around during the songs, and this was probably quite annoying for the band and audience alike, so after that I tried to stay still until the end of a song. Let’s call this “noobie mistake #1”.

When something interesting and unforeseen happens on the stage, either you already had your camera up to your eye and are able to capture it, or you only get the tail end of it. I didn’t manage to end up on the winning side every time, but I got a few of them, and when that happened I was fairly liberal in my deployment of the shutter button. This is always going to be a bit of a hit and miss affair, but the general rule is to keep your eye on the target. 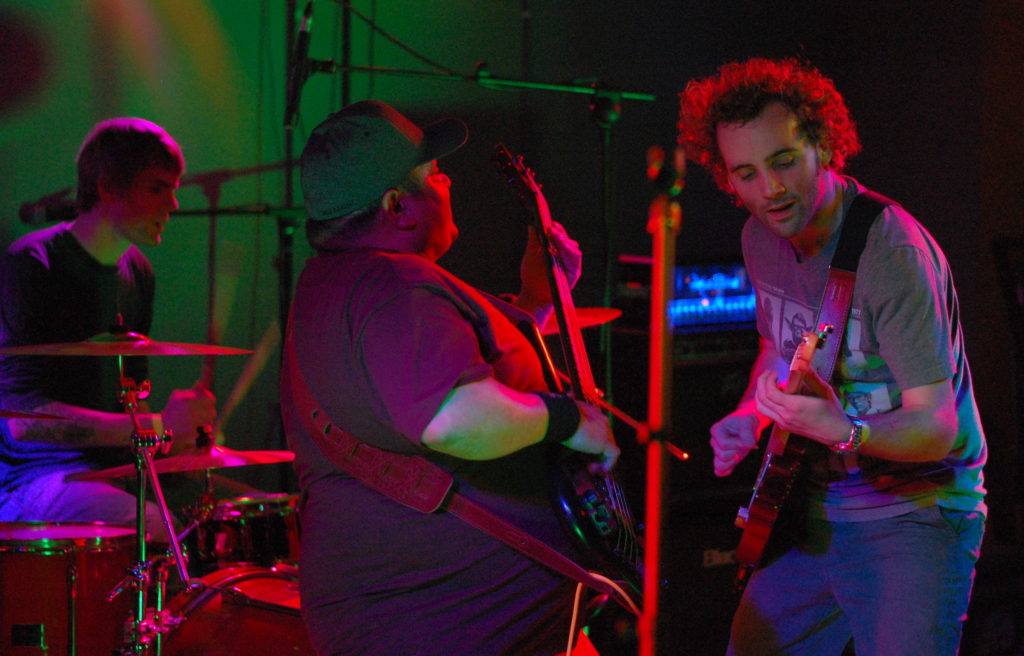 There was one particular angle which was giving me some difficulty. I was trying to capture the lead singer in silhouette against a very bright light. However he was moving around a lot, which meant that my camera was constantly in and out of his shadow, which made it hard to meter correctly. Looking back now, the solution is obvious – instead of having my camera in shutter-priority mode, I should have been on full manual all evening. Noobie mistake #2.

Noobie mistake #3 was another realisation that struck me during the evening – while I had my flash turned off, I wondered whether the autofocus assist light was causing any annoyance to the bands and/or audience, or whether it all just blends into the rest of the dynamic lighting that you’d expect in a gig situation. Either way, I’ve now learned how to turn it off, so next time I will start with it deactivated, and only switch it back on if the camera is utterly failing to find focus without it.

Finally, I wish that I’d also taken a few photos with my camera phone for comparison. It would be interesting to see how it fares, and whether an extra 10 years of technological advances are of any use.