Follows on from here

I didn’t think that I’d be writing this so soon.

On Saturday morning, I put the disappointing new alarm clock in the post to send it back to the vendor. Looks like they’re not going to pay for return postage, so I’m down £3.90. But I’m not salty, because things are about to turn out just fine (edit: look at that, they have refunded me after all!)

Saturday night was date night – my dad was down for the weekend, and Karen and I wanted to check out a new-ish restaurant that has been receiving glowing reviews. I’d mentioned that maybe the key to finding the right alarm clock was to go somewhere where I could actually check them out “in the plastic”, so to speak, so Karen suggested that we go out a little early and drop into John Lewis before it closed.

The range on display was very promising, and so we set to work assessing the options for suitability. I initially took a somewhat scattergun approach, and then decided on a different tack, which was: start with the one that looks sexiest, and see if it has all the features I need.

Unfortunately it can be difficult to find out exactly what features each model has. The little price tag next to each demonstration model supposedly lists 4 or 5 features, but it tends to say something useless like:

Sometimes the box has a handy feature list on the outside, but in this case the design was clearly from the minimalist Apple school – ie “here’s a picture of the product, and we’re done.”

Before I know it, cheeky Karen has cheekily cracked open a box and is cheekily perusing the instruction manual.

“But my goodness, you’re a cheeky one,” I gasped.

I then spent a few minutes reading the manual, each turned page causing my smile to widen. I had a play with the demonstration model, using the age-old technique of setting an alarm for one minute in the future. “Yes, it’s definitely loud enough,” shouted Karen from four feet away from me.

A shop assistant sidled over and sat down casually nearby. I suddenly became very conscious of how I must appear, with a box cracked open, leafing through the manual like I was at a library.

At this point, the poor guy was subjected to my entire life story to date. I basically recited my previous blog post on the subject. At the end of it, I realised that I’d taken up enough of his time, and the shop was going to be closing soon, so perhaps I should just get on with it and pay for this bloody thing. 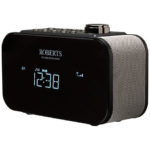 So, you’re all itching to find out – what features does this little doozy have, and why is it so bloody perfect? Let’s start with the things that the last one got wrong.

Next, some other good things about it:

All in all, I’m overjoyed with this device. It’s got absolutely everything I’m looking for.

And so this period of turmoil comes to an end, at least where clock radios are concerned.