When I get an idea in my head, I can sometimes become unhealthily obsessed.

My latest quest is for the perfect alarm clock. Let me take you back in time briefly. 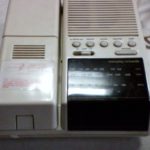 I’ve owned two alarm clocks that I can recall. Throughout my teenage and university years, I had a white Morphy Richards radio alarm clock with an integrated light. The light was very nifty, good for saving space on the bedside table. If the light looks a bit like a phone handset, then you should know that that’s no coincidence, because they also produced a near-identical model with a phone instead of a light. 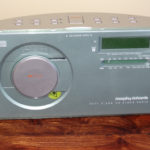 When I moved out on my own, one of the first things I treated myself to was something with an integrated CD player so that I could wake up to music of my choice. It’s the device that I use to this day, though I don’t tend to use it for its CD-playing abilities, nor as a radio. This is because Karen insists on a needlessly complicated and error-prone morning routine whereby her radio comes on at 7am, my alarm goes SQUAWK SQUAWK at 7:30am, and then we actually get out of bed at 7:48am when radio 4 tries to foist Thought For The Day upon us. So I don’t need something that can play sweet music, just something that can make a noise.

However, while it’s good, it could be better. I’ve decided that it’s time to find the perfect alarm clock, and here are the features I’m looking for:

I recently tried ordering a new alarm clock off of Amazon (hey, remember that debacle with the car stereo?) but am having to send it back, as it has the following flaws:

So the search continues. Sadly, it looks like Morphy Richards don’t make alarm clock radios any more, which is a shame as my experience with them so far has been pretty good.

Tell me about your alarm clock and why I should get one.

3 thoughts on “The Perfect Alarm Clock”