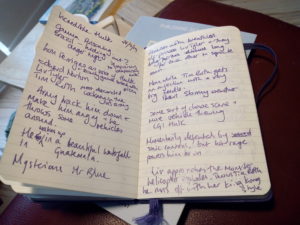 Luckily I made copious notes.

We watched The Incredible Hulk over a week ago and I have completely forgotten to write my review, to the disgust of Pete and Bernard. The thing is, we went on holiday and then I was working, so anyway.

I was a fan of the 1970s TV series about a scientist who growled you wouldn’t like me when I’m angry and then turned into Lou Ferrigno. I never though too hard about it, so I didn’t come into this with too many firm ideas. There was the bit with the gamma poisoning and Lou Ferrigno still does the the voice of Hulk (and had another cameo), so that was nice.

We open with something, I was knitting and didn’t follow the beginning very closely, but the scientist guy played by Ed Norton, I’m gonna call him Bruce Banner because I think that was his name, is hiding out at a factory in Brazil where he is clearly overqualified for his work, doing an anger management course, and pining for his girlfriend played by breathless elf princess Liv Tyler. The evil US army tracks him down in a bid to capture him and weaponise the Hulk. This makes him angry so he throws a few vehicles around and runs off.

He wakes up in a beautiful waterfall in Guatemala.

Meanwhile Tim Roth, playing the most highly decorated cockney in the US army, gets an injection from a really big needle. It appears to have no effect. Or does it?

Bruce catches up both with lovely Liv and the mysterious Mr Blue, who we notice always wears blue shirts, and is some other sort of scientist who is going to cure him of being a Hulk. Some sort of experimental stuff ensues. The army catch up with him again and he throws vehicles and Tim Roth at them. He runs off again, this time carrying lovely Liv King Kong-style. Her main role in this film is to wear wet clothes and be rescued. There aren’t any other female characters for her to talk to, so we can’t even apply the Bechdel test here.

Tim Roth has some more injections and starts throwing vehicles, at which point we realise that the injections are working. There is a big boss fight with exploding helicopters.

This film is loosely themed around good and evil, greed and power, and how even monsters just can’t help wanting to rescue wet girls.