It falls to me to critique 2015’s Avengers Age of Ultron, directed by Joss Whedon along similar lines to some other Avengers movies I have known. The opening sequence reveals which members of the Avengers team will be entertaining us today, to joyful squeals from Pete and Bernard: Thor! Captain America! Black Widow! War Crime! Hulk! Iron Man! Etc. I recognise some of these, though admittedly the one called War Crime is new.

To provide that important context, we are watching this from a cosy cottage in the Yorkshire Dales, while back in Commuterville the physical Casa Uborka is having essential works done to the bathroom. The room is arranged such that from where I am sitting, I can mostly see the reflection of sunshine on the TV screen, rendering the action obscure. I am knitting (for the third time) a shawl pattern called Ishbel, rendering the plot impenetrable.

From what I can gather, the initial plot is to defeat Hydra and seize Loki’s sceptre. Hydra immediately surrenders, leaving me for a moment delighted that the film is only half an hour long. However there is a development! Stark and Banner have been developing some sort of global peace initiative, the software for which suddenly becomes sentient and megalomaniacal (basically a more sympathetic Iron Man with a shinier outfit). Some various confusing things happen and it turns out this one is a baddie after all, and the action resumes.

The theme of this movie is around relationships and teamwork, or the lack of them. Unable to resolve the continual pissing contest between the main male characters, and without Nick Furry, they have no leadership or coherent plan. There is a tediously long fighting scene between Iron Man and Hulk, resulting in the whole crew being disgraced and dashing off to hide in a bucolic setting much like our own. Enjoy the view from my window which occasionally distracts me from this less-than-absorbing movie. 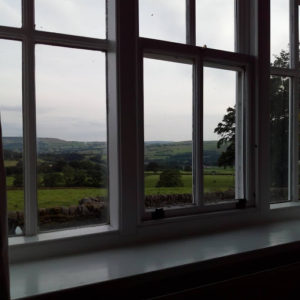 Other points to note are the utterly wooden flirting between Black Widow (has she ever been married? Is this her correct marital status? Perhaps there was a back story movie about her that I have so far missed. Perhaps this is all still for me to look forward to) and Bruce Banner. Also the question or who or what are The Avengers avenging? I see no avengement going on, other than the avengement postulated (but never carried out) by the Speedy Twins, who are new characters complete with their mini-arc which I will not spoil.

I seem not to have made any further notes. Perhaps I was drawn into the movie to the extent that I was rendered incapable of putting pen to paper. Perhaps I reached the lace rows in my knitting. Perhaps I fell asleep.

1 thought on “The MCU Project: Avengers Age of Ultron”