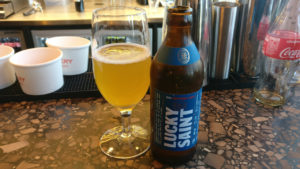 A new cinema has opened up in our town, and imagine my delight to discover that they offer an alcohol-free beer that I hadn’t tried before! Sadly I wasn’t bowled over by this one – it had an odd sourness that tasted, while not exactly metallic, still somehow inorganic. Still, it’s not hideously undrinkable, so I probably would consider purchasing this one again under certain situations. 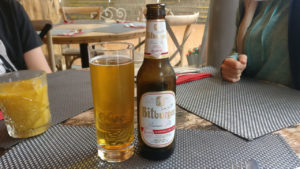 After the film we went round to a nearby thai restaurant which I haven’t been too for a while. And for the second time that day, I was presented with the opportunity to try a new alcohol-free beer. Sadly, my hopes of discovering a new favourite beer were to be dashed again. This one reminded me of those nasty cheap European lagers that come in “stubbie” bottles which you can (if you are so inclined) buy in supermarkets for less than it would cost to buy the equivalent volume of bottled water. For years I’ve had a policy of avoiding that bottle shape, just to be on the safe side, and so I feel quite irked that this piss has sneaked in under the radar. At the time, I decided that I definitely wouldn’t drink this one again.

However, a few weeks later we were in Staines and the restaurant that we went to for lunch offered only this as its alcohol-free option. I was feeling generous, so decided to try it again, and strangely this time I enjoyed it a lot more. It was served a lot colder, which I think may have helped its case. After lunch we then went off to some nearby shops to buy about eight packs of chocolate-covered raisins, which has been one of the recurring themes of this month. 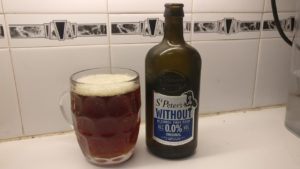 I read an article recently about how St Peter’s have changed the recipe for their alcohol-free beer, so when I saw a bottle on the supermarket shelf with a new label design, I felt I should give this one another go. Whereas the previous recipe was a sickly syrup of unfermented wort, this new one is nowhere near as bad. Yes, there’s still a lot of that unfermented worty flavour apparent, but I’d now rank this one on a similar level to the Old Speckled Hen. It’s definitely far from being one of my favourites, but it’s no longer the laughing stock that it once was. 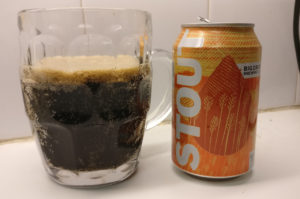 While I was grabbing the St Peter’s from the shelf, I also saw this, which is another beer that I tried long long ago, and hated it because it smelled and tasted like stale cigarette smoke. I was feeling generous so I grabbed a bottle to give it another try. I found it a little bit less repulsive than first time, but that stale quality was still there and finishing the drink was a challenge. 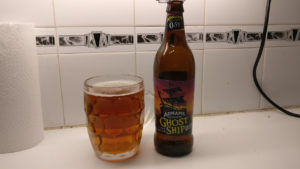 Rounding off the trio of beers that I tried a long time ago, I purchased a bottle of Ghost Ship, one of the first alcohol-free beers that I ever reviewed on this blog, to see if my opinion has changed. My biggest revelation is that my sensitivity to that “metallic” quality that I complained about a lot in my early reviews has apparently gone way, way down. This might just be because I’ve become accustomed to it, or maybe there was something affecting me at the time that caused my brain to interpret certain flavours as “metallic”. Who knows. Either way, I still find the Ghost Ship to be a bit thin and underwhelming, though to be fair I don’t think I’ve found any alcohol-free beer in this sub-genre that does a better job. 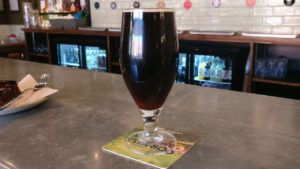 It’s become something of a regular routine for us to walk into town on a Saturday morning and grab a drink and a cake at one of the various coffee shops around the place. Our town centre has been undergoing lots of redevelopment lately (witness the new cinema, for example) and so there are a few new options on offer, with more to come.

Last weekend we walked into one place, did a few quick sums and came to the conclusion that there’d be no free tables by the time we got to the front of the queue, and walked out again. As we started to move towards another coffee shop, we noticed that the bar next door had a small sign outside offering cake. Interesting, we thought. Maybe we can find everything we need in here? So we went inside and as soon as I saw the range of alcohol-free beers on offer, I knew we’d be staying.

The cake system wasn’t quite what we were expecting. The barmaid said basically that we can choose any cake from the place next door (the place we were just in) and she’d pop round and get it. So Bernard toddled off with her to make his selection while I contemplated my drink options.

I eventually settled on this. The hazelnut aroma is intense and carries over great distances. The flavour doesn’t quite punch with the same weight, but it’s pleasant and well balanced. Like so many alcohol-free beers, it’s lacking a certain body. If this was coupled with a creamier mouthfeel then I would need to create a new scale to score it. So alas, it merely gets top points. 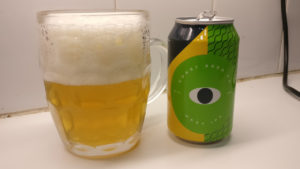 One perk of the site going down over the weekend and me needing to rewrite this review is that I’ve been able to squeeze in the latest addition, which was consumed after the previous post had already gone “to press”, as they say.

This one poured with a very lively head, as you can see from the picture. The smell promises citrusy sourness and an exciting tanginess. Flavour-wise, it resembles a slightly toned-down version of the Nirvana Ananda which is made by blending one of their pale ales with green tea kombucha.

An interesting little drink, probably a bit of an acquired taste to most, and not something that I’d want to drink frequently, but it’s something to make a nice little change once in a while.

I’d also like to take a moment to highlight that it’s almost exactly a year to the day since I published the first post in this series. In that year I have sampled, and reviewed, 39 different alcohol-free beers. I find myself wondering if I even drank that many different beers in the preceding year.