Before embarking upon the evening’s main events, we started with a quick game or two of Skull and then a game of regular Pandemic. We tried playing with 5 players, despite the fact that it’s only supposed to be played with 4 tops, and found it very challenging. In our defence, we managed to cure 3 diseases, but couldn’t quite cure the 4th before the player deck ran out. It was just too hard to get the collections of same-coloured cards into one person’s hand.

We took our time over setting up February. We needed to refamiliarise ourselves with our characters, their upgrades, and the consequences of the previous session’s games. We also took care to set up the game in the given sequence, as you’re allowed to see the outcome of certain steps of the setup before choosing characters, which will inform your decision.

The mission briefing contained a bombshell – that not only could the red disease not be cured, it could also now no longer be treated. Any red cubes that we allowed to sneak onto the board would be there to stay for the rest of the game. 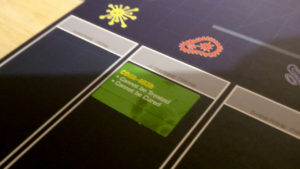 Red disease now no longer treatable in addition to being uncurable 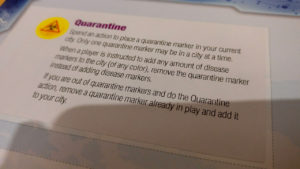 At this point the rules were also extended to permit us to define a “relationship” when creating a new character. We decided to make the new character a family member with Wei, the dispatcher, which meant that they’d get bonus actions if they started a turn in the same city. 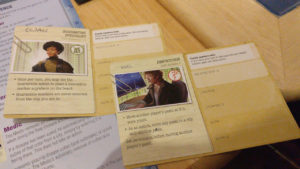 Don’t worry, we did write the names onto these labels after I took the photo

The February game began. We all played the same characters as last time, with the exception that Karen played as the new Quarantine Specialist and we left the Scientist in the box.

The initial distribution of cubes meant that the yellow disease was quick to cure, and fully eradicate. This turned out to be pivotal later on. The board was generally looking good at this stage, though the red disease had the potential to get a little out of hand. We refocused resources on getting over there and slapping down lots of quarantine tokens. Blue was close to being cured too, with very few cubes on the board.

We had some great luck in this game, it has to be said. Of the three epidemics that came up, two were for the already-eradicated yellow disease, and one was deftly averted by the presence of a quarantine token. 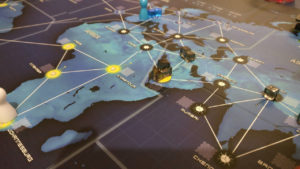 In his final turn, Gammidgy executed a magnificent sequence of actions and was able to clean up the final blue cubes before curing it, meaning that we then had two eradicated diseases for this game. 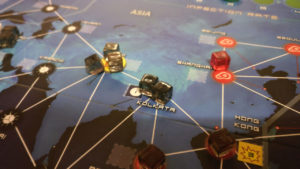 Only a single outbreak in this game, and that was in Kolkata

For our end-of-game upgrades, we chose to capitalise on the fact that we’d eradicated two diseases, and grabbed positive mutations for both. For the yellow disease, it can now be cured from any location (no research station required), and for the blue, instead of treating it one cube at a time, it can now always be treated in bulk (similar to how it would be if it were cured, or if the medic were doing it, but this applies to all players). We did have a research station in Baghdad, and considered getting a starting research station there to aid movement around the board, but decided that the two eradicated diseases were too good an opportunity to pass up. 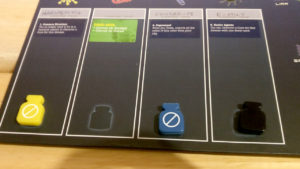 The mission briefing for this month gave us some good news – we now had new structures to add to the game, in the form of military bases. These offered a new fast travel network for selected characters, and there was also a new character introduced who could build them easily and move around from military bases and research centres by discarding any card. We named this character Derek, and set him to be a co-worker with Wei, which means they can transfer city cards even when they’re not both in the same city. We left Eric the medic in the box this time, and Gammidgy played as Derek. 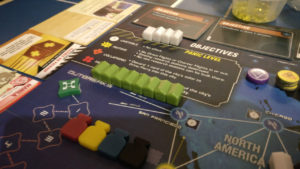 We now had an additional objective, on top of just curing three diseases. We needed to either eradicate one disease, or build six military bases distributed across the globe. We decided to principally focus on the latter, and see how it went.

We had a bit of bad luck early on when an epidemic occurred in Montreal and then the card immediately came up again, meaning that we had no opportunity to prevent an outbreak.

We managed to cure the black disease quite quickly, and at this point the board was looking reasonably manageable. There were a few cubes in Shanghai, but thanks to the quarantine specialist we had a quarantine token there so we didn’t have to worry about it too much. 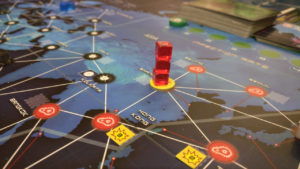 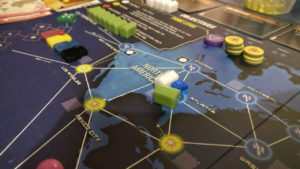 Military base and Research Station in Atlanta, with a single blue cube

We didn’t have as much luck with the epidemics this time, and this game was much more difficult as a result. Blue was the next disease to be cured, and finally yellow. Our main objective was complete, but we still had to get one of the optional objectives. Things were looking a bit hairy, with epidemics and outbreaks occurring in the black disease zone, and an outbreak in Shanghai. Both of our optional objectives were within reach, as blue was close to being eradicated, but we made the decision to continue to focus on the military-base objective instead, as there was less chance of bad luck snatching victory from our hands. 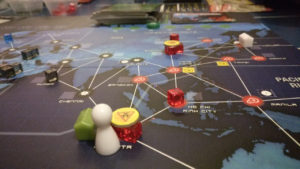 The situation deteriorating in Asia 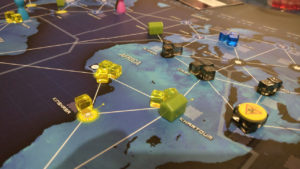 Black and yellow both on the cusp of crisis

The “Grassroots Program” event card popped up at a very convenient time, and we were able to get the sixth military base down just in the nick of time. The board was looking very troubling, and we wouldn’t have held out much longer. We also placed a research station in Riyadh as part of the last turn, which meant that for one of our two game-end upgrades we could place a starting research station there. This means that for future games we’ll all be able to fast travel over there on our first turn, if necessary. For our second game-end upgrade, we gave Ewan (the quarantine specialist) the ability to view the two two cards in the infection deck at the start of their turn, as this meant that if multiple cities were at risk of an outbreak, they’d know which one to place a quarantine token on. 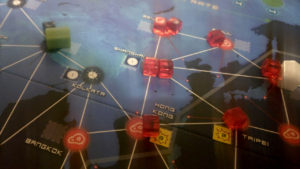 The end of game state in Asia – Hong Kong and Taipei haven’t worsened, but a couple of other cities are deteriorating slightly 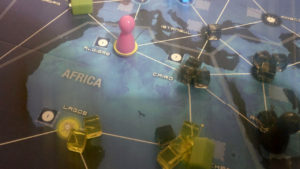 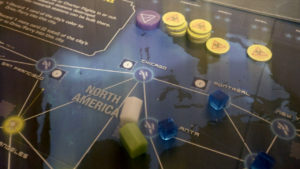 We managed to make much more progress in this session than we expected – we weren’t anticipating beating both February and March on our first go. But we are aware that we had a lot of good luck in the first game, and the second one we only got through by the skin of our teeth. April is going to be a huge challenge.