Let me tell you a story about when I worked in catering. One of my crappy jobs was ordering food from suppliers, which is probably not that hard if you know one single thing about catering, which it was quickly established that I did not. I was given a handy formula for working out how much to order, but if I applied it then the chefs moaned about tiny quantities of meat where the predicted order was only two portions.

This was before the internets were a thing, so the orders were done by phone, working from a paper catalogue. The dry goods catalogue was a huge dot-matrix printout listing each item alphabetically. Nobody told me the difference between 1×1000 candarel, and 1x1kg candarel, which seriously upset the diet chef when he had to open a LOT of packets to make diabetic jelly.

How is this applicable to the current situation, you demand, for everything must be made into a lesson we can apply in a pandemic. On opening my last bag of bread flour, I felt sad. And a bit stressed, because we eat a fair bit of bread and pizza, and because baking is a nice thing to do, it feels productive and wholesome and passes the time. And then a friend put me on to a catering supplier in Basingstoke, who delivers, and I opened up a glorious website of supplies, nothing marked out of stock, and all the types of flour. Now I am SURE I ordered 4×1.5kg of each flour, but apparently I ordered 1x16kg of each flour, and that’s fine, I’ll use it. 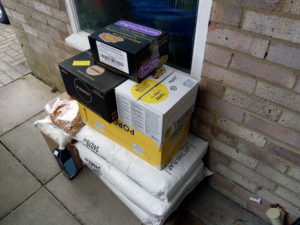 Note also the single carton of passata (not 1×6 then?) and the ENTIRE BOX of chocolate raisins. Oh yes, that’s nearly enough for Pete. And I’m pretty sure the raisins are the reason he didn’t hit the roof at 8am when a pallet of flour was delivered to a small suburban semi with no plans to open a bakery.