Today was supposed to be the last day of term, and as I don’t work Fridays (because of a surplus of leave days to use up after four months on furlough), I planned a relaxing day of pottering about, maybe heading into town for lunch at the Blue Orchid with Pete, before we drop back into Tier 3 tomorrow night. Meanwhile I’ve been hopefully anticipating that the schools would actually close a week early, to give a proper pre-christmas firebreak and protect all the poor old grandparents being visited by their disease vectoring family over the break; not so much for us, we’re not planning to travel 200 miles to attract or indeed spread covid cooties, we’re keeping them to ourselves – but just for society in general and not forgetting the creaking NHS. In fact we’ve been fortunate not to have experienced any school closures that affected Bernard this term, though he’s been off “sick” a couple of times while we’ve waited for test results after a mild bout of coughing or a slightly sore throat. His school did however decide that lessons today would be online, so bang goes my lazy day.

Having said that, it’s not as though we see a lot of him. The only evidence he’s around is the sound of the wheels of his desk chair when he occasionally shifts in his seat, or the murmer of him chatting online with godknowswho. Pete toyed with having a pyjama day, as neither of us had to get up to chivvy the boy to have breakfast, and then sensibly ruled it out, but did at least bring me a cup of tea (Tesco own brand assam teabag, since you asked) in bed. I checked the boy was doing his online lessons, then bimbled into town to pick up lunch and bits, as you do. Bernard’s lunch order was very specific: Waitrose sushi and a banoffi shake from the Brown Bag. This doubled the number of supermarkets and cafes I needed to visit, which isn’t great in the middle of a pandemic, but I’m a kind mum so that’s what I did. I dropped into the Blue Orchid, which is one of the local businesses who provided free school meals over October half term, and also makes delicious and crispy one-person quiches and sausage rolls. I don’t think I’ve been there that often, but the man behind the counter greeted me with great warmth, informed his colleague that I should have a quiche loyalty card, and gave me a free quiche. Meanwhile the other cafe, where I had to wait for five minutes for the shake, is absolutely crammed and uncomfortable and I don’t plan to return until we’ve all been vaccinated.

So that’s how my day’s going, and now in this gloomy post-lunch lull before the Uborka Supergroup gets back together for cocktail hour at 5pm, I thought I’d have my cup of tea. This is called Deer Valley Blue Gabalong Oolong. The “gaba” part refers to something called gamma-Aminobutyric acid, which is part of the mammalian central nervous system, and accumulates in tealeaves as a result of a particular type of fermentation. Here’s a picture to prove it: 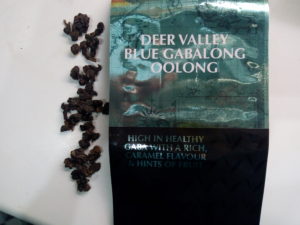 While sources agree that GABA found in tea doesn’t penetrate the blood-brain barrier, the good people at Imperial Teas of Lincoln adhere to the Uborka motto of never letting the truth stand in the way of a good story, and list 12 different health benefits of this tea, including deeper sleep and relaxation. So while my morning might not have been as restful as I had planned, I may now be taking an unscheduled nap, which actually is a super way to pass a December afternoon.

This tea is taken without milk and in the mug Pete was grumbling about yesterday, which reminds me of a scene in the Mike Myers movie So I married an axe murderer. The tea tastes like honey and chocolate, and the flavour gets more complex as the liquid cools, which is why it’s quite nice to have a bucket of it. Health benefits or no, it’s nice to drink. The mug was a birthday gift a few years ago from my little sister, who accompanied it with a spectacularly beautiful blooming tea. Pete’s right, it doesn’t really get used often enough to justify its place in the cupboard, but I do quite like it for a soup when it’s just me in the house, which is never. 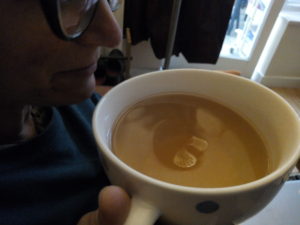