I felt under a lot of pressure to get my teabreak in early today, such that I got into a tizz and managed to make a hash of things. I run a breastfeeding support group on zoom at 10am on Tuesdays (you’re very welcome, if you’re having any issues), and was marking exams until 9:55 at which point I thought I’d put the kettle on, then had to dash back and forth from the kitchen letting people into the room and apologising for nipping back to the kitchen to put milk in my cup and so on, and failing to deliver the cup I made for Pete, which he then put in the microwave 45 minutes later, hope it wasn’t awful, sorry, love you.

As a result I didn’t get a good photo of the tea in the pot, because I was flustered and poured it all out and started drinking it. Then it hit me full in the face, no really, the smell of this tea was distinctive, I believe we are using the word ‘robust,’ and it was robust all over the place. Today’s tea is Cola Flavoured Black Tea. Either have a coke, or have a cup of tea. Not both. Don’t try to do both. Let me show you how they describe this tea: 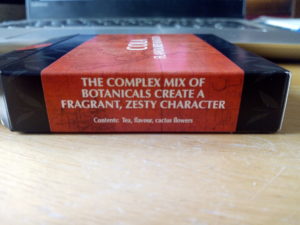 The cactus flowers were not visible to the naked eye. On the back of the box, there is talk of taking the finest high grown Sri Lankan teas and RUINING them by making them taste like cola.

Today I borrowed Bernard’s Urban Birder mug, a gift to him from his Uncle Pockless for his birthday. The good Doctor is apparently gifted at gifting mugs. It has a fetching design featuring a crow with chips in its beak. It went well with the cola-tea. 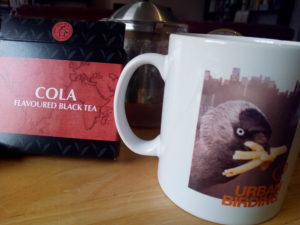