Today’s tea is the first of the green teas. I think of myself as a person who doesn’t like green tea, but when it comes with a title like Gunpowder Temple of Heaven Green Tea, my expectations are inevitably high. What I don’t like is that dry mouthfeel and often insipid flavour, so I can happily report that, while it does feature the dryness, this is all flavour, from before it even hits the mouth.

The “gunpowder” reference arises because of the way the leaves are dried in rotating drums, resulting in them somewhat resembling gunpowder, although I’d say it’s more like shot. It even pings as you drop it into the metal infuser. 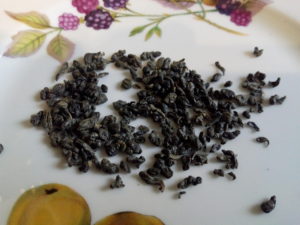 As you lift the cup, you get a sweet smoky caramel aroma, which intensifies in the mouth. The box says it’s subtle, but it is not – this time in a good way. This is a pleasantly acceptable green tea, and I’d drink it again. My mug today is a souvenir of Brooklands, a motor museum and famous former racetrack where we’ve had a few nice days out. I like its retro styling, but I don’t usually use it because it’s a bit on the small side. I felt that would be appropriate for a green tea that I might not like. 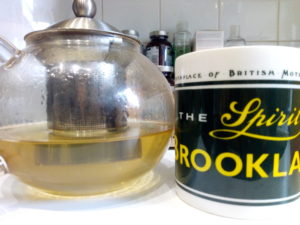