Browsing through the archives, I am unsurprised to notice how often I moan about advent calendars, those expensive pieces of packaging justified by a miniscule volume of cheap chocolate, which I usually enjoy ripping the back off and consuming in one go, often in November. I have tried, oh boy have I tried, to communicate to Pete’s mum that these things give me no joy, they give me NEGATIVE JOY. And still they come. One each, every year.

But not this year*

This year, and actually every year, I have a birthday well-placed for the giving of fancy advent calendars. And this year, to my utter delight, Pete’s mum sent me a TEA ADVENT CALENDAR. A TEA ADVENT CALENDAR, PEOPLE! How utterly marvellous is that? I shall tell you how marvellous, and I shall aim to tell you on a daily basis until Christmas, at which point the tea will run out and I’ll be sad. 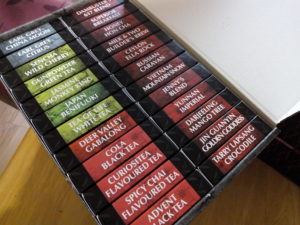 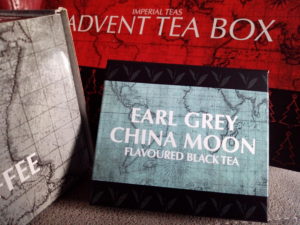 As you can see, all the packaging is cardboard, and nice little potentially reusable boxes, too. When you open the outside container, you find 24 small boxes of different loose leaf teas. They aren’t numbered, so clearly there are no rules about what order you drink them in, and as you can see they are grouped here by type. So I have shuffled them, to give me an order, and then I have gone about my day which has been busy, and finally now at half past three in the afternoon, I can take some time to enjoy my First Cup of Advent Tea.

At the top of the first column, we have a box of Earl Grey China Moon flavoured black tea. There are only two Earl Greys in the box, which is probably plenty. Even though I have quite the tea drinking family, I was completely and utterly unaware that Earl Grey existed, until my first term at uni, when everyone in Halls was drinking it. I went on to discover that my Great Aunt had an entire kitchen cupboard full of tins of tea, which I aspired to (and now, as a grown up, I have). I really enjoy a cup of Earl Grey, but not as much as I enjoy tea that doesn’t taste of weird flowers, so I don’t drink it all that often, and at home often cut it with the amazing Raspberry Ruffle tea from Suki Tea in Belfast, and half again of plain black tea. Earl Grey never fails to remind me of my time in University Halls, and that’s not a 100% happy smattering of nostalgia, but with the huge benefit of decades of growth, I can at least now appreciate how far I’ve come, and enjoy tea with a hint of bergamot once more.

So I made myself a cup of tea, using my pretty glass teapot so that I could see the colour of it, and my very favourite mug with a hydrangea on it. It’s not the hydrangea so much as the shape of the mug that I particularly enjoy, but I have nothing against the hydrangea and it certainly suits a flowery Earl Grey. 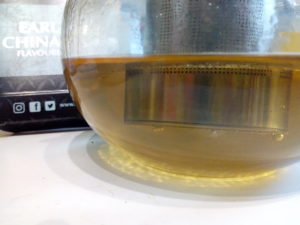 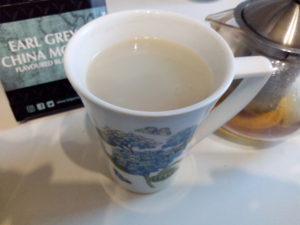 As you can see, it’s on the pale side. I don’t think tea should be the colour of wee, so I poured it through the filter a second time and it got a little darker, but still light. The text on the box tells us that the tea is made in the shop in Lincoln to a secret recipe, but that it uses real bergamot oil rather than an artificial flavouring like most commercial Earl Grey. It can be drunk with or without milk, and I have gone for with milk, because although I do really like the taste of tea without milk, it makes me nauseous. While it looks pale, it does have plenty of flavour, and in fact I wouldn’t want it to be much stronger than this, because the floral notes of the bergamot are intense and linger in the mouth. This is a refreshing cuppa, and was worth waiting for. Tomorrow’s tea will be tasted at around the same sort of time, probably.

*Actually she did send the usual packaging-based advent calendar this year, because she forgot that she had also sent the Tea Advent Calendar. Never mind.

2 thoughts on “The Great Tea Advent-ure”