As is so often the case, I have this month’s AFBeerClub box to thank for these beers. 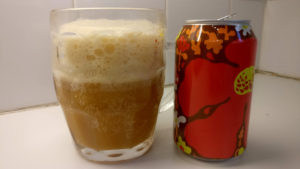 This is a pale ale brewed with rosehips which flows in a viscous and creamy fashion, and appears orange and opaque in the glass. The smell is sickeningly fruity, a bit like tomato juice, of which I am not a big fan. The flavour is similarly, and I’m not going to beat about the bush here, revolting. Surprisingly, I actually managed to finish this, but only by sipping at it slowly over the course of an entire evening. 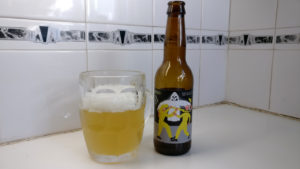 I often find Mikkeller beers to be very non-beery which leaves me feeling a bit confused and disappointed, but this one smells like a really robust and pleasingly familiar IPA. It’s quite hazy and pale to look at, and the flavour is absolutely heavenly. It’s quite a bit smoother and creamier than I was expecting from the smell, and it’s an absolute masterpiece.

Ridgeside “Nothing But The Rain v.7” 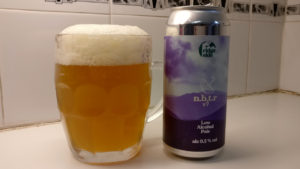 This beer tumbled out of the can with rather a lot of head, though not so much that it was in danger of making a mess. It’s cloudy with a pleasant and slightly lemony smell. The head dissipated very quickly leaving it looking a bit flat. The drink tastes good, smooth and balanced, and that little lemony hint is quite invigorating. For me, this is the right level of sourness for a pale ale. 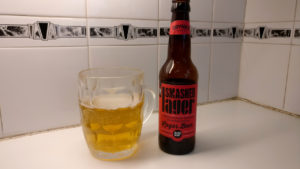 This lager has a medium colour and a very small head which disappeared very quickly to nothing. The smell is inviting, and puts me in mind of Brooklyn Special Effects, which is another alcohol free lager which I’ve returned to again and again. The flavour of this beer is excellent, with one or two slightly strange aspects to it, but on the whole this is an incredibly mouthwatering and more-ish beer which honestly I could just quaff and quaff and quaff all night long.