I entirely and completely owe the inspiration for this post and the last five months of cookery to my brother the honourable gourmand Dr Pockless, who didn’t fight me when I stole the idea, cooked up by him and his own friends who I don’t even know, to cook food from a different country each week, following the alphabet around the world. You’ll remember how grey and groundhogdaylike January was, relentless never-ending lockdown and rain. There were very few highlights, and initially I enjoyed this on a purely vicarious level as he made some sort of Armenian okra curry, and experimented with Burmese gram flour tofu. However by week three he was posting photos of a delicious-looking jerk chicken dish from a Caribbean recipe, and I decided that I actually wanted a piece of this, and not in any sort of metaphorical sense.

Clearly this is going to have to be a series of posts, and perhaps you too will participate vicariously, drooling from time to time but sticking with pizza; I will however share the recipes in case you too want to take your armchair travels into the kitchen. I never did get on board with Armenia or Burma, and I’m also currently missing G, J and K. The rules are quite relaxed; you don’t have to cook the same dish or even the same country, and sometimes you have to look sideways to find the right country for the letter (Quechua instead of Qatar, you know who you are). So this won’t be an orderly tour through the alphabet, by any means.

C: Caribbean Jerk Chicken
This is where it all started, as tempting for the rice and peas as for the marinated and roasted chicken thighs. Dr Pockless and I both used John Torode’s recipe from the BBC, and I adapted it by not using a scotch bonnet chilli, which would be too hot for Pete and Bernard. And let me tell you, I was absolutely right to jump on to this bandwagon at this point. I enjoyed the discipline of following the recipe closely (too often I treat the recipe as a mere inspirational guideline). At this point I still didn’t know I was committing to the whole alphabet, just aping my brother’s culinary adventure.

D: Dominican Lasagne De Berenjas
And yet a few days later, when Dr P posted his photograph of this beef and aubergine lasagne, I was quick to follow. I knew Bernard wouldn’t go for the aubergine element, but tried this one out anyway. For this we both used a more authentically Dominican recipe, that you can even read in the original spanish if that works for you. Mine did not come out as a neat square portion like the one illustrated, and Bernard did, as expected, pull out all the aubergine and dump it on to my plate; however it was satisfyingly meaty (and I don’t cook beef very often) which pleased him, and I really love aubergine, so in the end everyone was again very happy. 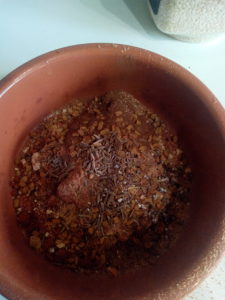 This recipe called for Berbere Spice [illustrated], which for Dr Pockless entailed an adventure through locked-down Budapest to find an African food store. I already had everything I needed for the spice mix, and in fact everything I needed for the entire recipe, in my cupboard. I do make lentil dishes a lot, and this one leapfrogged all of them to be the Top Lentil Dish. It was deeply spicy and excessively moreish; I would expect to have leftovers of something like this, and not one single lentil remained. It should be noted that Dr Pockless made special pancakes to go with this, and I did not.

F: French Tartiflette
‘F’ week offered me a nice crossover with a concurrent project using my slow cooker, which is basically that I am working through my slow cooker recipe book on Fridays, just in case I get drunk at Uborka cocktail hour and am too stocious to prepare dinner. The next recipe in the SC book happened to be tartiflette, and I love LOVE LOVE reblochon (a Savoyard cheese), so what to cook for France was a complete no-brainer. As I recall, Bernard wasn’t a massive fan of the strong cheese (he’ll develop), and it may have been one of those nights where his dinner is toast and a cup-a-soup. No recipe for you, because it’s in the book, but I’ll send you a photo if you like. 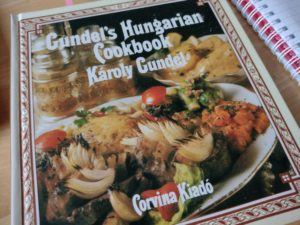 [You’ll note the lack of a G, Dr P and I simply couldn’t decide what to do. We’ll come back to it]
I bought this cookery book in a charity shop for 99p, which is interesting because it says on the back it originally cost 360 Forints, which is in fact about a quid. I mainly use it for this one recipe, which is in my top three favourite Hungarian dishes, partly because I absolutely adore sauerkraut. It consists of a pork goulash, heavy on the paprika and caraway, with masses of sauerkraut added at a later stage, and then sour cream (adapted to use half fat creme fraiche, this weight won’t lose itself). I did once serve this to LyleD4D, which considering the standards at which he usually eats, it was very kind of him to eat it. 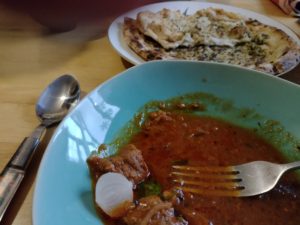 By the letter I, I finally remember to photograph the meal before I had completely finished eating it. Dr Pockless and I regularly exchange food photos on Whatsapp, to our father’s mystified disgust, but my camera reel has nothing from the alphabet project before this dish. You will note the pickled onion, which makes this dish automatically and inherently right for me, for reasons that may have been disclosed before on the blog. Vindalho makes you think it’s going to blow your head off, but if you actually follow this recipe, while the spices are complex and interesting, the heat is tolerable for a cautious teenager and a sensitive-stomached 40 year old. I don’t think I have ever made a pork curry before, but I most definitely will make one again. 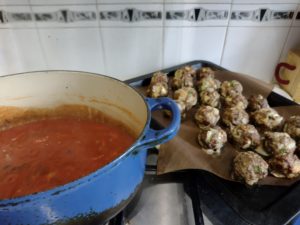 Many stages of these meatballs were photographed, from both the UK and from central Europe, where this dish was the first one we both cooked on the same night. What is to be said? You cannot but cannot go wrong with meatballs. There is a LOT of cinnamon in this recipe, and the grated carrot in the sauce really elevates it in taste and texture, while also hiding the vegetables as this parent is still inclined to do. It turned out that there was exactly the right amount of cinnamon, and maybe not quite enough of the meatballs, given that we all went back for thirds.

I shall leave it there for now, though I am at S in real life. In the next chapter we’ll go straight through M-S, ending once again with meatballs, and we’ll find out more about how you could actually cook alphabetically around the world making only dishes that consist mainly of chicken and rice. It’s a staple.

1 thought on “Cooking alphabetically around the world”